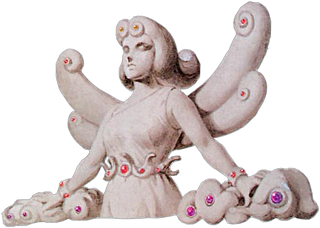 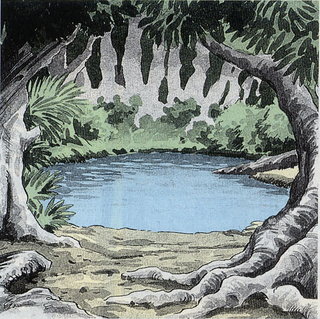 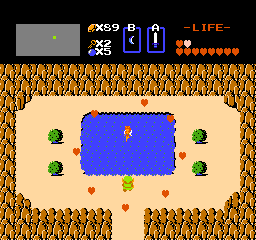 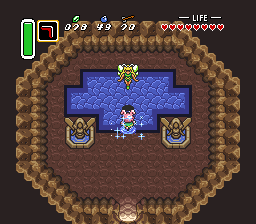 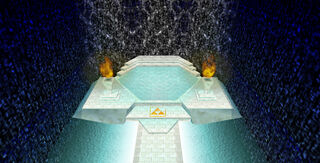 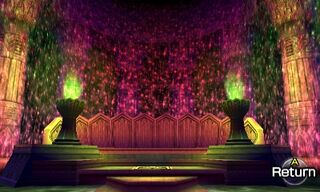 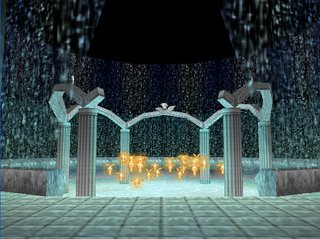 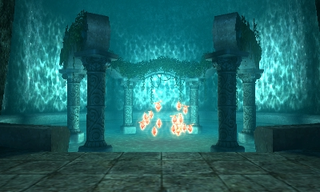 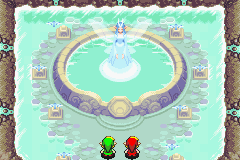 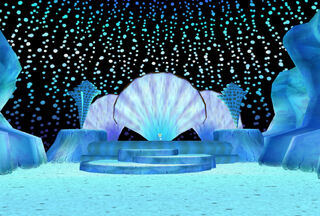 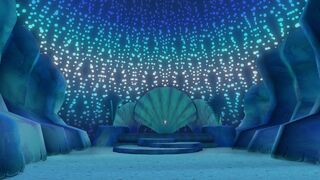 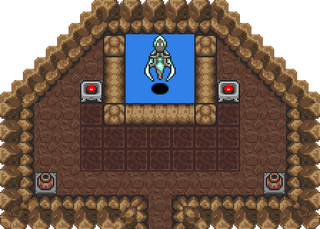 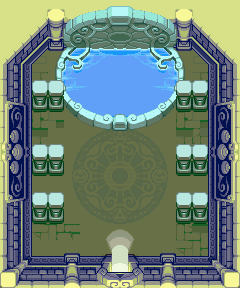 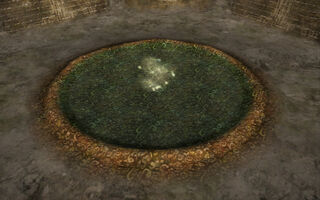 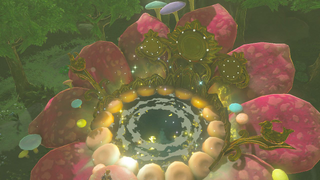 They are usually located in holes or caves; however, they are inside of houses shaped like seashells in The Wind Waker and out in the open in Breath of the Wild. They are often inaccessible without special abilities or items, for example, behind giant rocks or walls that must be bombed. Upon accessing the Fountain, Link may be rewarded with important items or power-ups which are helpful or necessary to finish the game. However, in some games such as A Link to the Past, Great Fairies residing within fountains only heal Link without granting him any special abilities.

Great Fairy Fountains are found all over Hyrule in A Link to the Past, either inside caves or holes, with some of them being more well-hidden than others. Keeping with the overall appearance of the fountains in the original The Legend of Zelda, Great Fairy Fountains contain a large pond in the middle with two statues resembling Fairies at the side. The Great Fairy within will heal Link's wounds completely when he approaches her.

There is a Great Fairy Fountain known as the Pond of Happiness located inside a cave on an island in the middle of Lake Hylia, which is home to the Queen of Fairies, Venus. Once inside, Link will find a long hallway leading up to a small pond with two statues on each side. The pond asks Link how many Rupees he would like to throw in, which would then tell him whether he would have good or bad luck. Every time the hero throws 100 Rupees into the pond, the Fairy Queen appears and grants him the ability to either carry five more Bombs or Arrows, with the maximum being 50 and 70, respectively.

Two Mysterious Ponds can also be found. The pond in the Light World, known as the Waterfall of Wishing, houses a Great Fairy within and is located right before reaching the Zora River. Just like the rest of the Great Fairy Fountains, it has a pond in the middle with two torches at the side. Here, Link can throw the Boomerang, a Bottle, and a Fighter's Shield into the pond to make a Great Fairy appear and receive better items in return, such as the Magical Boomerang, Medicine of Magic, and the Red Shield.

The second pond, located in the Dark World, contains a Cursed Fairy. If Link throws in his Bow in the middle of the pond, the cursed Great Fairy will appear and bestow upon him the Silver Arrows.[12] Link can also throw in the Master Sword Lv2 to turn into the Master Sword Lv3.

There are four Faerie Springs scattered throughout Koholint Island in Link's Awakening. Each houses a Great Fairy capable of fully restoring Link's health. The Faerie Springs can be located at:

In Link's Awakening DX, an additional Fairy can be found, who refers to herself as the Fairy Queen. The Fairy Queen resides in a small fountain in the final room of the Color Dungeon. As thanks for visiting her, she bestows Link the "power of color", which is either the Red Clothes or the Blue Clothes. These tunics increase the power of Link's weapons or his defense when worn, respectively.[13] Link can revisit the Fairy Queen anytime to swap between the two tunics, but he can never regain his green tunic.

The location of each of the Great Fairy's Fountains as well as the power-ups received are:

Fairy's Fountains are known as Fairy Fountains in Majora's Mask. They're all located in the four cardinal directions of Termina: Woodfall, Snowhead Region, Great Bay Region, and Ikana Canyon, including Clock Town as well.

The appearance of Fairy's Fountains in Majora's Mask are more similar to the Fairy Fountains in Ocarina of Time. There is still a large pond in the middle, but there are no torches or Triforce symbols; instead, the Fountain is surrounded by several columns and arcs. Since the Great Fairies living within were shattered into Stray Fairies by the Skull Kid wearing Majora's Mask, it is up to Link to gather the missing Stray Fairies from each of the area's dungeons in order to receive the respective power-up from the Great Fairies.

Only one power-up is required to proceed through the game, being the one in North Clock Town during the first 3-Day cycle, which introduces the Magic Meter.

In Oracle of Seasons and Oracle of Ages, several Great Fairy Fountains are scattered throughout Holodrum and Labrynna. A Great Fairy will also reside in the canopies of each game's respective Maku Tree once they have grown large enough.

In Four Swords, each of the Great Fairies of Forest, Ice, and Flame await at a Great Fairy Fountain in the Sea of Trees, Talus Cave, and Death Mountain Stages respectively.[14] Each Fountain can be reached by using the Warp Zones that appear after defeating the boss of that particular Stage. It is at each of these locations that the Links may receive a Silver Key, Golden Key, or Hero's Key of that Stage's Great Fairy, depending on the number of Rupees they collect.

Fairy Fountains are all located on different islands of the Great Sea in The Wind Waker, especially on the Fairy Islands. Fairy Fountains are easily spotted as they are shaped like seashells, with the exception of the one in Outset Island's Outset Island, which is instead a hole covered by a Huge Rock. Their entrances are all blocked by certain obstacles such as Huge Rocks, fires, vines, and among other things that must be removed using various items, such as Bombs or the Skull Hammer. The inside of the Fountains still retain the same large pond from which the Great Fairies come out. There are also several seashells aligning the walls, keeping to the outside characteristics of the Fountains.

The names of the Fairy Islands in which the Fairy Fountains are located, along with the upgrades received are:

Link can encounter various Great Fairy's Fountains while inside certain dungeons or caves in Four Swords Adventures.[16] Great Fairy's Fountains are rather small compared to its predecessors and are usually very easy to find. They bear a slight resemblance to the Waterfall of Wishing from A Link to the Past, and they also play the same role. If Link throws a certain item into the pond, the Great Fairy will upgrade it to a Level 2 item.[17] If Link does not upgrade his items, he will not be able to proceed through the stage.

There are three Great Fairy Fountains in The Minish Cap that are home to a Great Fairy in each: the Great Mayfly Fairy, Great Butterfly Fairy, and the Great Dragonfly Fairy.

The locations of the Great Fairy Fountains as well as the upgrades received are as follows:

Great Fairy Fountains are all found inside different floors of the Cave of Ordeals in Twilight Princess. Once Link reaches the 10th, 20th, 30th, and 40th floors, he can approach the pond in the middle of the room to make a Great Fairy appear. She will reward him by releasing Fairies at the springs of the four Spirits of Light.[21] On the 50th floor of the Cave of Ordeals, the Great Fairy will fill one of Link's Empty Bottles with Great Fairy's Tears.[22] She will also tell him that he can get more Tears by going to any of the Light Spirit's Springs, although Link will only be able to have one Empty Bottle filled with Great Fairy's Tears at any given time.[23]

Great Fairy Fountains appear nearly identically to those of A Link to the Past, with some even located in the same locations. In Lorule, behind the Bomb Flower Store, there is also a Great Fairy Fountain where the Great Rupee Fairy resides, who will give Link an Bottle after receiving a total of 3,000 Rupees, restoring her body's form.

Fairy Fountains appear in several Stages in Hyrule Warriors. The Fountains have two functions; either functioning as normal Keeps to be captured, or as mission objectives, where a Great Fairy may be summoned through a Magic Circle to help in battle, usually after escorting a character to a Keep. Fairy Fountains appear in Hyrule Field, Faron Woods, Valley of Seers, Palace of Twilight, and Skyloft, although whether they are used or not depends on the Scenario.

A lone Cucco may sometimes be found inside the Fairy Fountain Keeps. Attacking them will summon a Cucco Rogue Force into the battle.