Great Fairy is an alternate weapon moveset used by Link in Hyrule Warriors. It effectively allows the Great Fairy to fight in Link's place while Link himself follows held inside a Bottle (a form of irony that is a reference to Link's habit of carrying Fairies in Bottles) that flies alongside the Great Fairy as she flies (holding the bottle in her arms when she guards). Link can coordinate Combo Attacks with the Great Fairy during which she will release him from the Bottle briefly. This weapon has a Water Elemental Attribute and its Strong Attack increase attack strength at the cost of some defense. Though powerful weapon, the Great Fairy's power is offset by her running speed despite being able to fly, Link is capable of running much faster than her, making her a poor choice for scenarios that require haste on the players part such as timed scenarios or moving around in large battlefields quickly. Despite this weakness, she has an interesting variety of combo attacks, such as playing a brief game of Dead Man's Volley with Link before slamming the energy ball into the ground, which damages nearby enemies, dropping giant bombs and then sitting down forcefully, summoning a Fairy Fountain and rain, borrowing Link's Knight's Sword to attack enemies with slash waves, or summoning Levias to unleash a deluge of lightning. During her Special Attack she even summons the Moon to crush enemies and during her Focus Spirit attack she blows a kiss which transforms into several multicolored fairies. 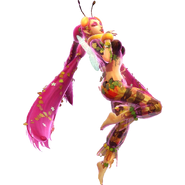 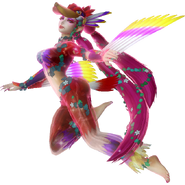 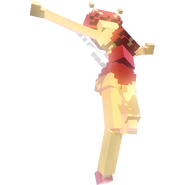 Retrieved from "https://zelda.fandom.com/wiki/Great_Fairy_(Hyrule_Warriors)?oldid=539756"
Community content is available under CC-BY-SA unless otherwise noted.