Great Fairies,(ALttP | LA | OoT | MM | FS | TWW | TMC | TP | BotW)[4][5][6][7][8][name reference needed] also known as Guardian Spirits,(BotW)[9] are recurring characters in The Legend of Zelda series. They are large humanoid Fairies.[10] Their main purpose is to heal Link whenever he is wounded and will also recover his Magic Power in games that incorporate a Magic Meter.[11] In other titles, such as Ocarina of Time and The Wind Waker, they also bless Link with new items, powers, or upgrades of his existing equipment. The Great Fairies' appearance differ vastly between games, and most of them can be found living within a Great Fairy Fountain.

In The Legend of Zelda, while not specifically referred to as a Great Fairy, and appearing as a normal Fairy, there are a few ponds in the Hyrule overworld where they can be found. These pool-dwelling Fairies have the same role as Great Fairies in later games; they will only appear if Link approaches their pond with less than full health, and will instantly recover all of his Hearts.

In A Link to the Past, Great Fairies can easily be found scattered throughout Hyrule in either caves or holes. When Link approaches one, she will completely heal his wounds. Great Fairies seem able to maintain their normal forms even while in the Dark World, despite its corrupting effects.

At the Waterfall of Wishing near Zora's Waterfall lives a Great Fairy who is known to be a friend of Venus.[12] She looks identical to Venus with the exception of her wings, which are smaller and more green. The Fairy at the Waterfall of Wishing appears when Link throws various items into the Mysterious Pond and will ask him if he was the one who dropped them. She will return any item thrown by the hero, but if he drops certain items, she will instead give him better items or upgrades of the item if Link answers her questions honestly.[13] These include the Boomerang, which she upgrades to the Magical Boomerang, the blue Level-1 Fighter's Shield, which she upgrades to the Red Shield, and a Bottle, which she fills with Medicine of Magic.

In Link's Awakening, Great Fairies are found scattered throughout certain areas of Koholint Island, usually in a cave that houses a small pond and two Fairy statues. They heal Link's wounds when approached. Not all Great Fairies in Link's Awakening live in a cave, there is one that lives in a small pond in the Mysterious Woods. There is also the Fairy Queen who only makes an appearance in Link's Awakening DX, and resides in the last room of the Color Dungeon, a dungeon exclusive to Link's Awakening DX. As thanks for visiting her, she rewards Link with the "power of color"; a choice between the Red Clothes, which increases Link's attack power, or the Blue Clothes, which increases Link's defense.[14] Link can visit the Fairy Queen again to swap between the two tunics, but he can never get his green tunic back once he has swapped it for another tunic.

In Ocarina of Time, Great Fairies are depicted as giant women who wear ivy vines and leather boots for clothing, and have red hair that is tied into three pigtails. This also marks the first time that Great Fairies are seen without wings. Their locations are scattered throughout Hyrule, where they live in certain Great Fairy Fountains that all have the Triforce symbol engraved on the floor in front of their pond. By playing "Zelda's Lullaby" on this symbol, the fountain's Great Fairy will be summoned. Great Fairies, when first called, will bless Link with either a new item or an upgrade. The color of their fountain's walls also vary from either blue or red to signify what kind of blessing they will give. Three of the Great Fairies give out Din's Fire, Nayru's Love and Farore's Wind. Another three will upgrade Link's abilities, giving him the Magic Spin Attack and the Magic Meter, a larger Magic Meter, and doubled defense in the form of an extended health bar.

In Majora's Mask, the Great Fairies share the same in-game model as the ones from Ocarina of Time, though with each one having a different hair color and eyebrow shape. Five Great Fairies appear in Termina, all having been torn apart into 15 Stray Fairies by the evil power of Majora's Mask. The only Great Fairy that needs to be restored in order to progress in the game is the one in North Clock Town, who grants Link the ability to use Magic, and only one Stray Fairy has to be found for her to once again be complete. For the other four optional Great Fairies, Link must recover the 15 Stray Fairies scattered around the dungeons that are found in each corner of Termina in order to be rewarded with upgrades and a special weapon.

In Oracle of Seasons, many Great Fairies appear through Holodrum.

In Oracle of Ages, many Great Fairies appear through Labrynna. Near the Eyeglass Island Library in the past, Link encounters the Fairy Queen, guardian of the Zora Seas, who was cursed by Veran into an Octorok-shape so that the evil sorceress could poison the seas and kill the Zoras without the Fairy Queen's interference.[23] She asks Link to find the Fairy Powder hidden in the nearby Library to heal her,[24] and once he does, she cleanses the pollution from the sea, returning its natural beauty and restoring health to the King Zora and Lord Jabu-Jabu.[25][26][27]

In The Wind Waker, there are seven Great Fairies, five of which reside in fountains under a giant shell. One must be rescued from inside a Big Octo at the Two-Eye Reef.[28] Another Great Fairy, the Fortune Goddess,[29] lives in the Forest of Fairies in Outset Island and gives Link a larger Wallet.

The upgrades received, along with the names of the islands in which the Great Fairies are located, are as follows:

After granting Link their respective upgrades, the Great Fairies subsequently vanish from their fountains, leaving in their place a handful of healing fairies, which Link can also capture in Bottles for later use.

In Four Swords Adventures, Link can encounter a Great Fairy while inside certain dungeons or caves. If Link throws in a certain item into the Great Fairy's pond, she will upgrade it to a Level 2 item. For example, throwing in the Slingshot will allow Link to shoot seeds from three different directions at the same time. Encountering these Great Fairies is crucial in order to solve various puzzles within the stages. The Fairy Queen also appears in Four Swords Adventures, during the Hyrule Castle level.

Three Great Fairies appear in The Minish Cap, each one found in a Great Fairy Fountain hidden in Hyrule. They each test Link in a different manner and reward him if he passes.

In Twilight Princess, a Great Fairy appears within the Cave of Ordeals in the fountains that are found every ten floors. Each time Link reaches a new fountain, the Great Fairy will send healing Fairies to one of the Spirit Springs across Hyrule.[30] The first time Link reaches the fountain on the 50th floor, the Great Fairy will reward him by filling one of the young hero's empty Bottles with Great Fairy's Tears.[31] She will also tell him that he can get more Tears by going to any of the Light Spirit's Springs, although Link will only be able to have one Bottle filled with Great Fairy's Tears at any given time.[32] However, should he complete the Cave of Ordeals again, he will be able to fill another Bottle with the Tears at the fountain on the 50th floor, allowing him to have more than one.[citation needed] The Great Fairy can also warp Link out of the Cave of Ordeals if he asks her to.

In A Link Between Worlds, Great Fairies are commonly found scattered throughout the land of Hyrule. Many of them can be found in the same places as the previous Great Fairies. These Great Fairies will completely heal Link every time they are visited.

The Great Rupee Fairy is found in Lorule, in a cave behind the Bomb Flower Store. Once Link has access to the Big Bomb Flower, the entrance to her fountain can be opened by blowing up the large rock in front of it.

In Breath of the Wild only four Great Fairies appear, named Cotera, Kaysa, Mija and Tera. At first they are found in closed fairy fountains resembling a large flower bud. To restore them, Link must offer them an increasing amount of Rupees. Once restored they will upgrade Link's armor when provided with the proper materials, though the max level depends on the total number of restored Fairies. Additionally, a fifth fairy fountain can be found, but it contains the Horse God Malanya instead, though his hands resemble those of a Great Fairy.

The Great Fairy from The Wind Waker appears as a Trophy and a Sticker in Super Smash Bros. Brawl. 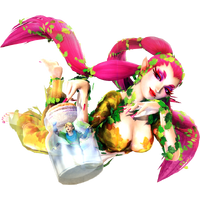 In Hyrule Warriors, Great Fairies appear in several Scenarios, heavily modeled on the Ocarina of Time incarnation. They are supportive characters who live inside Fairy Fountains, and they may be summoned by praying to them for aid inside of Magic Circles. They help in various ways, depending on the battle; such as sending Fairies to drop giant Bombs on enemy units, calling upon a recreation of the Terminian Moon to knock Argorok out of the sky, or sending a rain of energy that destroys several enemies on the field. Great Fairies appear in Hyrule Field, Faron Woods, Valley of Seers, Palace of Twilight, and Skyloft, where their fountains can be found. Whether they are summoned or not depends on the Scenario.

Great Fairies are also a class of Weapon used by Link, in which control switches to the Great Fairy (as the Weapon) while Link is kept inside of a giant Bottle. The kind of Great Fairy that appears depends on the level of Weapon used. The Great Fairy uses magic attacks and magically-enhanced physical attacks in battle. In some combo attacks, Link is momentarily released as he and the Great Fairy perform special, combined attacks, including a form of Dead Man's Volley that targets surrounding enemies. The Great Fairy's enormous size makes her a powerful character, and her attacks cover a wide range. The Great Fairy Weapon is of the Water Element.

In the Boss DLC Pack, Great Fairies appear as giant bosses that are fought in Ganon's Fury Mode. They appear in battles acting as healers to other giant bosses that Ganon fights. They must first be defeated in order to prevent the other bosses from recovering. They continue to carry giant Bottles, although with Link absent, and do not perform any attacks that require both the Great Fairy and Link.

In Super Smash Bros. Ultimate, the Great Fairy appears as a Spirit with the ability, Critical-Health Healing, which heals the user when they reach high damage.

In Hyrule Warriors: Age of Calamity, the four sisters of the Great Fairies from Breath of the Wild; Cotera, Tera, Kaysa and Mija, as well as Malanya, fight as a single warrior (by way of sharing their pool) using their magic bracelets as their weapon. Their unique action is dependent on which of the Great Fairies is currently active, as they will change places with each other as they attack.