"A bow without equal wielded by the Rito Champion, Revali. It's said Revali could loose arrows with the speed of a gale, making him supreme in aerial combat."
— Hyrule Compendium

The Great Eagle Bow is an item from The Legend of Zelda: Breath of the Wild. It is a Rito bow that was once wielded by the Champion Revali. Link obtains it as a reward from Rito Elder Kaneli for freeing the Divine Beast Vah Medoh. It is a multi-fire bow that fires three arrows at once though uses only one Arrow of ammunition per shot. Like all the Champion weapons it can be reforged when it breaks, by the blacksmith Harth in Rito Village. The components required are five bundles of Wood, one Diamond, and a Swallow Bow.

While bows such as the Savage Lynel Bow, Royal Bow, and Ancient Bow have more attack power (or in the case of the Savage Lynel Bow the chance of a Five-Shot Burst bonus), the Great Eagle Bow holds an advantage over them in a few categories: it has superior range and it has a built-in quick shot bonus. This sets it apart from the other Champion weapons, which generally become obsolete as Link gains access to later-game weapons. It has the same attack range as the Ancient Bow, Duplex Bow, Falcon Bow, Swallow Bow, and Phrenic Bow with only the Bow of Light and Twilight Bow having greater attack range and power though are single shot bows. However, the Great Eagle Bow is the strongest Rito-made bow. While its base attack is 28, its three shot burst multiplies its damage by three if all three arrows hit, thus its damage output is 84. Its innate Quick Shot, three shot burst, and its ability to be remade make it ideal for the Horseback Archery Drill mini-game at the Mounted Archery Camp. Its usefulness in competitive archery is quite fitting as Revali once utilized it to win an archery competition, which lead to the construction of the Flight Range where Revali trained to develop Revali's Gale. Link himself can utilize it in the Flight Range mini-game run by Tulin after Teba recovers from injuries sustained in the battle with Vah Medoh. Its triple shot and quick shot make it extremely useful for slow motion shooting in midair as it designed for aerial combat like all Rito armaments.

Revali wields the bow during one of Link's Recovered Memories though left it behind in Rito Village when he accompanied his fellow Champions to Lanayru Road - East Gate to provide moral support to Princess Zelda after her training at the Spring of Wisdom thus did not have it with him during the Great Calamity ultimately contributing to his murder by Windblight Ganon. The bow became venerated as a treasured relic of the Rito people which was passed down among the Rito Elders to Kaneli who gives it to Link after he avenges Revali by slaying Windblight Ganon and frees Revali's spirit allowing him to retake control of Vah Medoh. Its description claims it is a bow without equal, even though there are other bows that outclass it though it fits with Revali's boastful personality and the Rito's tendency to hold Revali's abilities in high esteem which presumably extends to his legendary bow. 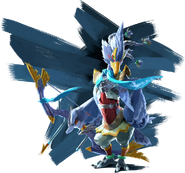 Retrieved from "https://zelda.fandom.com/wiki/Great_Eagle_Bow?oldid=543789"
Community content is available under CC-BY-SA unless otherwise noted.