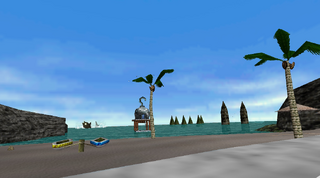 The Great Bay Region,[1] also known as the Ocean,(MM)[2] and Great Bay,(MM | SSBM | SSBU)[3] the Sea,(MM3D)[4][citation needed] is the western area of Termina in Majora's Mask. It is a large shore that makes home to the aquatic race of the Zoras, who live in the Zora Hall. Its hot weather, murky waters,[5] and population of enemies now plague the Bay.[6] The Great Bay is also home to the Gerudo Pirates, who live in their fortress.

The entrance to the Great Bay is barricaded by fences, requiring that Link bring Epona to jump over them.

The Great Bay Coast is the main part of the region. Found in the coast is the Fisherman's Hut as well as the Oceanside Spider House. The coast provides access to the other parts of the western region.

The Marine Research Lab is located some meters from the coast. It is where various marine biology experiments are carried out. Link finds here the tank in which he should place the Zora Eggs stolen from singer Lulu by the Gerudo Pirates from the northern fortress.[7]

The Fisherman's Hut is where the Fisherman lives, where he used to practice fishing until the coast became unsafe. He has a Seahorse for sale. The Fisherman wants a Pictograph of a Gerudo Pirate, and will allow Link to take his Seahorse in exchange. He also offers to play a mini-game which involves jumping between platforms, where a Piece of Heart can be obtained.

The Oceanside Spider House is a cursed, abandoned house east from the coast. It is full of Gold Skulltulas. A man seeking shelter appears here once all of the Skulltulas inside have been slain, and will give Link various awards depending on which Day he had cleared the house out.

The Pirates' Fortress is the refuge of the dreaded Gerudo Pirates.[8] Having an industrial appearance, it is a stronghold where the stolen Zora Eggs are held inside pools of water (although only four of the Eggs are actually kept here, since the Pirates lost the other three).

Pinnacle Rock is northwest from the coast. It is a formation of rocks filled with nothing but murky water. Beneath the waves of these waters (deep under the rocks) is home to the Deep Pythons.[9]

Zora Cape is south from the coast. It is where a river ends its path towards the sea. It is full of rock elevations, and it is also where Link can find the rest of Great Bay's areas, including a Fairy Fountain.

Zora Hall is the congregation area for the Zoras, found inside a coral reef a few meters from the river. It is also the home of the famous rock band The Indigo-Go's.

The Great Bay Temple is the only temple in Termina that is not located within a specific area. It is inaccessible to most people and is surrounded by a very powerful cyclone of water.

Found east of Zora Cape, the Waterfall Rapids are accessed from behind the top of the river's waterfall.[10] It is the home of two Beaver Bros., who will race Link and, on the event of losing, will give away an empty Bottle (after two races) and a Piece of Heart (after four).

Great Bay appears as a stage in Super Smash Bros. Melee. The stage features the Marine Research Lab as the main platform. A rock platform stands to the left and the Giant Turtle to the right; the palm trees on his back serve as two smaller platforms. After a while, the Turtle will hide underwater, reappearing after a set amount of time.

Tingle makes a cameo appearance floating on a balloon that can be used as a platform. If a player stands long enough on the balloon, or it is pierced by an attack, it will burst and drop Tingle on the platform below. Eventually, Tingle will blow up another balloon.

The Four Giants and the Moon also make a cameo appearance in the background. As the fight progresses, the Moon will come closer to the ground. Eventually, the Four Giants will appear and stop the Moon, returning it to its original position.

Great Bay returns as a stage in Super Smash Bros. Ultimate with updated graphics to closely resemble its Majora's Mask 3D appearance. Like every other stage, it also features a flat Omega form and a Battlefield form with three extra platforms.