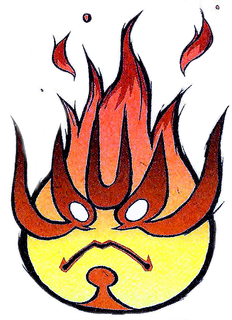 Gouen is the Boss of Death Mountain in Four Swords.[1] It is a ball of fire that bounces around much like a giant Podoboo and is similar to Hot Head from Link's Awakening. His true form is that of a small, charred creature.

At the start of the battle, Gouen will summon a series of small flames that converge on his smaller body to form his main flame. Gouen is practically invincible when he is fully covered in flames. He attacks the heroes with balls of colored fire. If the Link of the same color hits the ball of fire, it will be reflected back at the monster. When the ball of fire makes contact with him, his flames will scatter. The Links must strike the flames to locate which one he is hiding in to cause damage.

When Gouen has taken enough damage, he will revert to his flame-less form but will continue to desperately attack Link with balls of fire and swirling flames. At this stage he is weak and can be defeated with just a few more hits.

When the Links fight him again, he will appear in an even stronger form.