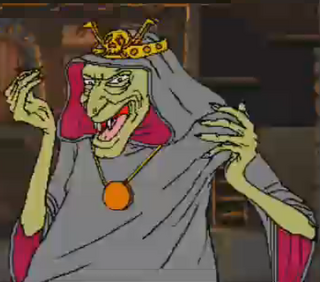 Goronu (pronounced /ˈɡɒɹoʊnuː/ GO-roh-noo)[1] is the first boss in The Faces of Evil.[1] He is located in the Goronu area, and is encountered again at Fortress Centrum.

Goronu is a necromancer and a minion of Ganon. He is first encountered at his Face of Evil, the Goronu area. As Link enters his chamber, he raises the dead as Stalfos to attack the living.[2] He is defeated by several Firestones, and he dissolves in flames.

He is later encountered again at Fortress Centrum when Link goes to find the Crystal of Reflection. He finds Zelda asleep there, but is revealed to actually be Goronu in disguise in an attempt to ambush Link. He is fought and defeated again the same way.