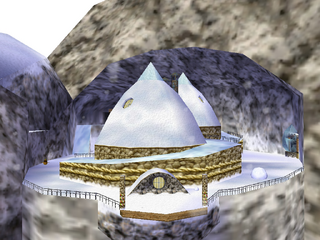 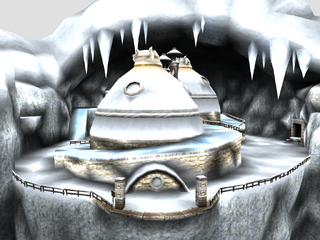 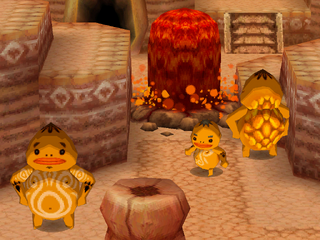 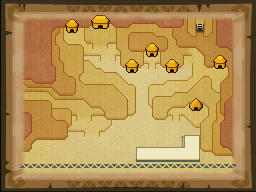 Goron Village is a recurring location in The Legend of Zelda series.[1]

Situated in the Snowhead region of Termina, Goron Village is the home of the Gorons in Majora's Mask. Since the weather has been so cold, many of the Gorons have retreated into the Goron Shrine in the center of the Village to keep themselves warm. To the east side of the Goron village is the Lone Peak Shrine housing the Lens of Truth. On the west side of the Village, a Goron can be found within his Goron Powder Keg Shop, where he sells Powder Kegs.[2][3] There is also a Business Scrub nearby who will sell Goron Link a bigger Bomb Bag for 200 Rupees by exchanging his older Bomb Bag. If the Swamp Title Deed is given to the Scrub, Deku Link will be able to launch himself to a high ledge containing a Piece of Heart.

Goron Village is home to the Goron Elder and Kagoron, the mountain goddess's messenger in Spirit Tracks.[4] The main area of the Village consists of seven houses, including the Goron Country Store and the Goron Elder's house. To reach the Fire Sanctuary, Link must go through the Goron Elder's house, which has the entrance to the Sanctuary at the back.[5] To the west of the village is a path that leads to the Altar of the Mountain Goddess, where Kagoron is located.

When Link first arrives at Goron Village, lava is erupting from the ground preventing entrance to the main area. Link is advised to visit Kagoron at the Altar of the Mountain Goddess.[4] After Link speaks with Kagoron and tells him of his wishes to enter the Fire Sanctuary, Kagoron grants the him the Freight Car, which Link must use to retrieve Mega Ice from Wellspring Station in order to cool off the lava and allow the Gorons to enter the Village.[6] Once Link manages to bring enough Mega Ice to freeze the lava, he will then have the opportunity to speak with the Goron Elder, who grants him passage to the trail leading to the Fire Sanctuary to meet with Embrose.[7]

An Anouki will provide Link with a Force Gem if taken to Goron Village, but only after Link takes a Goron to Anouki Village.[8] One Goron is kept from entering his house due to lava, but if Link brings him Mega Ice, he will be rewarded with another Force Gem.[9]