Zelda Wiki
Register
Don't have an account?
Sign In
Advertisement
in: Mini-Games, Locations in Spirit Tracks, Tracks,
and 2 more 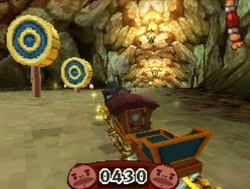 Fire Realm
The Goron Target Range is a Mini-Game in Spirit Tracks.[1]

The Goron Target Range is situated in the Fire Realm, just west of the Goron Village. For just 20 Rupees, Link can participate in this minigame, which consists of hitting blue and red targets with bombs from the cannon while riding the Spirit Train. Blue targets, which yield 10 points each, can only be hit once before they're destroyed, while red targets can be hit three times for a total of 90 points before they get destroyed. However, if Link hits a target with a face of a Goron, he will lose 30 points.[2]

As Link is riding the Spirit Train, which moves automatically,[3] he must hit the targets that pop up on the side of the tracks. Some of the targets do not change, while others rotate, sometimes revealing a Goron face at the back of said target. Towards the end of the minigame, he will also encounter targets that are floating up in the air.

If Link scores enough points, he will be given the choice between a small chest and a big chest, each yielding a different reward.[4] The big chest yields Rupees, while the smaller one contains a treasure. The greater Link's score, the more valuable his reward is likely to be. Ironically, the value of the reward in the small treasure chest is always of greater value than the reward found in the big Rupee chest. If the young hero scores 1000 points, he will be able to unlock the second level, an expansion of the first one.[5] This allows Link to obtain even higher scores and obtain better rewards.

The prizes obtainable for after a certain score are as follows:

Tracks in The Legend of Zelda series
Community content is available under GNU Free Documentation License unless otherwise noted.
Advertisement