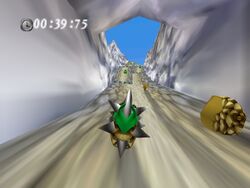 Road to Goron Village
The Goron Races,[1] also known as the Patriarch's Race,[2] is a racing Mini-Game in Majora's Mask.

The race is held every spring at the Goron Racetrack.[3] Its entrance is located on the top of the hill on the Road to Goron Village. Link must first defeat Goht in the Snowhead Temple in order to lift the curse and bring spring back. To gain access to the racing grounds, Link first needs to buy a Powder Keg and blow up the huge boulder blocking the way.[4] To do so the first time, Link must acquire the keg from a Goron, who gives it to him as a test so that the hero can learn to use this type of explosive.[5] He becomes eligible as a participant of the race after talking to the Goron Elder's Son.[6]

Link's objective in the race is to speed his way past several other Gorons by rolling to the finish line. On the way he encounters many obstacles including Bomb Flowers, trees, a bridge, and other Gorons. To ensure his victory, Link needs to break many green pots and roll up as many ramps on the track as possible.[7] Once he succeeds, he will be rewarded with Gold Dust, which can be used to create the Gilded Sword.[8] Each time Link wins the race, he will be awarded with Gold Dust, which can be sold.[9]

During the race, there are obstacles such as ramps, bridges without guardrails, Bomb Flowers, and dead trees. Other Goron racers tend to attack Link whenever the opportunity arises. A well-placed collision with other Gorons or repeated smaller collisions with them can knock Link to the ground, forcing him to curl up again and regain his speed.

By the time Link comes around the final turn, there is typically at least one other racer who manages to keep up. Should this happen, Link must try to break its trajectory with a gentle nudge or two to slow him down enough and get ahead of him. However, most collisions that Link initiates tend to work in the other Goron's favor.