Zelda Wiki
Register
Don't have an account?
Sign In
Advertisement
in: Mountains, Locations, Locations in Oracle of Seasons
English 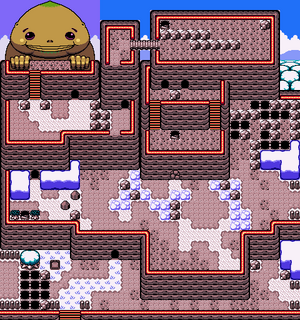 Goron Mountain is a location in Oracle of Seasons.[1] It is a snowy mountain range located in the northern portion of Holodrum.

Located in the mountainous region of northern Holodrum, Goron Mountain is situated between Mt. Cucco to the east and the Temple Remains to the west. The area of Goron Mountain is permanently fixed in winter (likely made to reflect the heightened altitude), and cannot be changed with the Rod of Seasons since it is one of the few regions in Holodrum not to yield Tree Stumps. With the seasons in chaos due to the sinking of the Temple of Seasons, Goron Mountain is said to become even colder, increasing the possibility of catching cold simply by standing outside on the mountain.[2]

The Gorons of Goron Mountain frequently complain about the cold and they rarely step outside the mountain.[2][3] Unfortunately, Biggoron, who is unable to fit within the caves, must stay perched atop the mountain, subject to the harsh weather of the mountain.[4][5] Unsurprisingly, Biggoron catches a cold which can only be cured by the Lava Soup which Link obtains in the Trading Quest.[6] Later on, Link may need to return to Biggoron atop the mountain to tell him a secret obtained in a Linked Game of Oracle of Ages in order to obtain Biggoron's Sword.

The foothills of Goron Mountain are marked by several pitfalls. The Dragon Key, which is used to stop the flow of the waterfall on Mt. Cucco in order to access the Dancing Dragon Dungeon can be found in one corner of the mountain, surrounded by rocks and pitfalls. The key can only be reached with the help of Moosh's flying abilities.

According to his diary, the Goron Elder traveled from Labrynna to Goron Mountain long ago.[7] The diary is found within the hands of a Goron who claims to be the Goron Elder's descendant.[8]