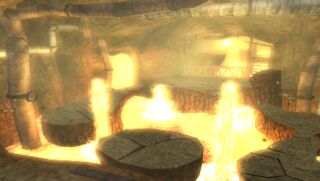 The first room of the Mines

Goron Mines guide
at StrategyWiki
The Goron Mines are the second Dungeon in Twilight Princess.[1]

Entrance to the Mines

In pursuit of the second Fused Shadow, Link must enter the Mines through a passage in Death Mountain, which he can access after defeating Gor Coron in a Sumo Wrestlin' match using the Iron Boots.

The Goron Mines are notable for featuring several forms of advanced technology. It deploys several complex machines that operate to keep the place functional, including magnetic cranes, elevators and mine carts; Link can take advantage of the machinery available to explore the dungeon. The insides of the Mines are also filled with lava and flame geysers; to avoid them, Link has to use his Iron Boots to stick to magnetized platforms. Link does not need to worry about the temperature, despite the hot environment. Due to its high temperature, the Mines are inhabited by several fire-based enemies. Despite this, some rooms of the Mines are filled with water.

Link must seek out the three remaining Goron Elders - Gor Amoto, Gor Ebizo, and Gor Liggs - in order to piece together a shattered Key to get into the final chamber, where the Goron Patriarch Darbus was imprisoned after being transformed into the Twilit Igniter Fyrus. The dungeon has two floors and contains many large rooms, some with walkways over massive pools of lava. The mini-boss guarding the Hero's Bow is a Goron guardian named Dangoro.

Towards the end of the dungeon is an open area of the Mines that is flooded with water. It is crisscrossed with scaffolding manned by Bulblin archers. On the uppermost walkway in the northeast corner of the area is a Treasure Chest containing a Purple Rupee. It can only be reached after retrieving the Clawshot from the Lakebed Temple.