It has been suggested that the portion of this page concerning Lullaby Intro should be made into its own page. Should the target page already exist, this content should be merged into it where appropriate. Discuss this on article's talk page. 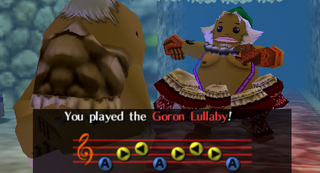 Puts Gorons to sleep
The "Goron Lullaby" is a song in Majora's Mask.[1]

The Goron Lullaby is learned at the Goron Shrine in the Goron Village.

This lullaby has the opposite effect to that of the "Sonata of Awakening:" it puts people, specifically the Gorons, to sleep.[6] Link must use this song in order to put the Goron who is blocking the path to the Snowhead Temple to sleep.

A lullaby is a melody played to children in order to help them sleep at night.