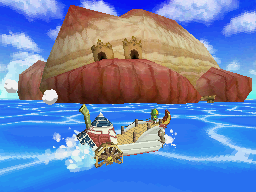 Goron Island is a location in Phantom Hourglass.[1] It is found in the southeastern quadrant.

The island serves as home to Goron Temple, the fifth dungeon in the game. A population of Gorons inhabit this isle, which, out of context, may explain where most of them were in The Wind Waker. The Goron's tribal leader on the island is named Biggoron, and his son who later becomes a friend of Link's is called Gongoron. There are a total of 14 Gorons who inhabit this island, all of which Link must talk to before he can even speak to the tribal leader.

The only other island containing Gorons in Phantom Hourglass is Dee Ess Island.

After Link speaks to every Goron on the island, Biggoron will let the hero try a quiz. By passing this quiz, Link will become a "sworn brother" of the Gorons, earning the right to enter Goron Temple. In this test, Link will be asked questions about the island and its inhabitants, some of which ask how many Gorons live on the island, what the specific Goron is doing, etc.. There are six questions in all, and Link can make unlimited attempts, but each try costs twenty Rupees. Through the process of attempting this quiz, Biggoron will tease Link with the prospect of earning Rupees, but take them all away if he misses a single question. The "fee" Biggoron asks Link to pay to become an official Goron is equal to the price he wins in passing the quiz.

After Link has become a sworn brother, Goron residents will add the prefix "Goro-" to whatever the player named the hero in their save file. For example, if the player named him Link, he would be called "Goro-Link".

On the north part of the Island is a massive maze which Link will need to use Bombs in order to block up cracks in the walls. Blue Chuchus and Like Likes live in the area and Link must kill them off with bows or bombs in order to proceed. There are a few treasures waiting for Link in the area that he can get. If Link runs out of Bombs, he can use some of the Bomb Flowers in the area.