"Our motto is, "From the kitchen to the battlefield, we've got the right tool for you to wield!""
— Tanko

The Goron Gusto Shop is a shop from The Legend of Zelda: Breath of the Wild. It is owned by Tanko and acts as the General Store at Goron City in the Eldin Canyon region of Hyrule.

The Goron Gusto Shop sells Cooking Ingredients along with Fire Arrows and Ice Arrows in singles. It is the only shop that sells Goron Spice as standard wares as the travelling merchants Yammo and Stamm sell it as a rainy day special wares. Additionally the Goron Gusto Shop is a general store thus is in a fixed location while Yammo and Stamm travel around between specific areas. Goron Spice is a secret recipe passed down among the Gorons for generations and is a valuable spice among both Hylians and Gerudo. The shop also sells Cane Sugar and Rock Salt. The Rock Salt sold at the shop apparently is supplied by the Goron Group Mining Company as a mineral by-product of their mining for Gemstones. It is unclear if Gorons use Cane Sugar, Rock Salt, and Goron Spice as spices in cooking the rocks they eat.

Like other shops in Breath of the Wild the items it stocks are limited by a certain amount before the are out of stock, during which time Link will has to wait until Tanko restocks which requires Link to leave the area and return later as passing time via a Campfire or sleeping at the Rollin' Inn has no effect on a shop or merchant's ability to restock. The best way to get it to restock is to warp to another part or several different parts of Hyrule preferably outside of Eldin Canyon, then warp back to Goron City. 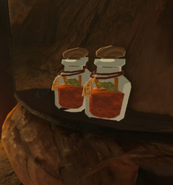 Retrieved from "https://zelda.fandom.com/wiki/Goron_Gusto_Shop?oldid=540662"
Community content is available under CC-BY-SA unless otherwise noted.