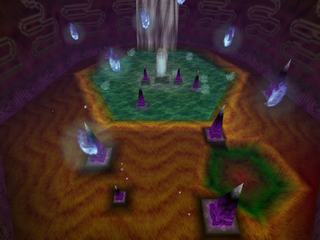 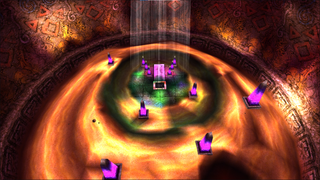 The Goron Graveyard is a location in Majora's Mask.[1][note 1]

The graveyard rests high above a cliff in the Mountain Village of Snowhead, and it serves as the resting place of Darmani III, the Goron hero.[3] However, in order to access it during the winter, Link must use the Lens of Truth to help him see which path to take in order to successfully climb the cliff, since the ladder leading up to the graveyard is concealed by snow, invisible to the naked human eye.

It is in this graveyard that Darmani bestows his powers to Link in the form of the Goron Mask after he plays the "Song of Healing" for him.[4] Once Goht is defeated and spring returns to the mountains, the Lens of Truth is no longer needed to see the ladder rungs embedded in the cliff. Also, a new, easier pathway to the Goron Graveyard is opened up - a tunnel leading up through the cliff which can be rolled through as Goron Link.

If Goron Link pulls Darmani's grave, a Hot Spring will fill up most of the graveyard. Link can then store some of the Hot Spring Water in his empty Bottles.