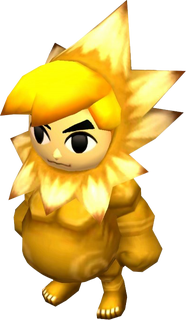 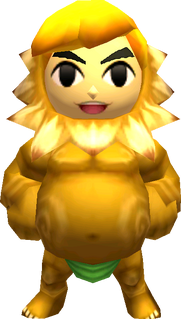 Protection from Fire and Lava
Attacking Fire-based Enemies
The Goron Garb is an item in Tri Force Heroes.[1]

The Goron Garb is an Outfit that can be crafted at Madame Couture's after Link completes the Forest Temple. The Outfit dresses Link as a Goron, with body paint on his flanks, a loincloth, and a mane similar to Darunia's. Notably missing are the Goron Emblems on the arms of the Outfit.

The Goron Garb grants Link protection from Fire of all forms, allowing him to swim freely in Lava and attack Fire-based enemies—such as Fire Keese and Fire Gimos—without being burned.[2] Link is also unaffected by Fire projectiles and traps while wearing the Outfit.