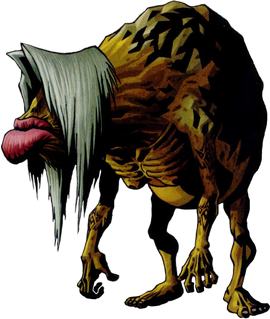 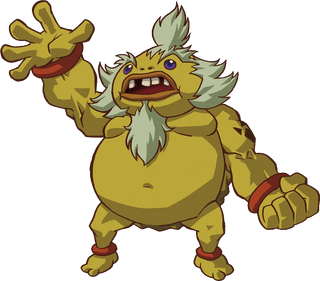 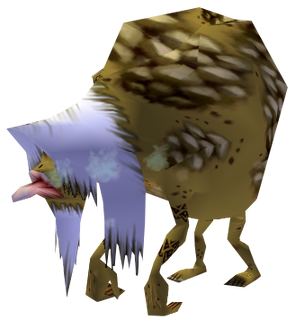 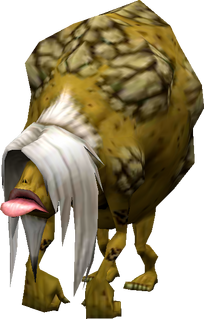 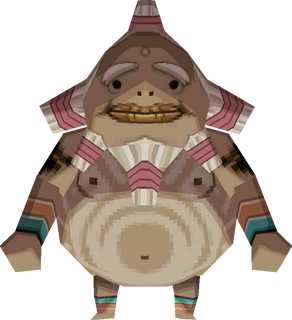 Goron Elders,[5][6] also known simply as Elders,(TP)[7] are recurring characters in The Legend of Zelda series.

In Majora's Mask, the Goron Elder is an aged Goron who acts as the tribal patriarch of the Gorons in Goron Village and is the father of the Goron Elder's Son.[8][9] The Goron Elder had left the village and became frozen,[2] resulting in his son crying loudly. On a quest to calm the child down, Link finds the ancient Goron Elder frozen at the Twin Islands. Link, as Goron Link, can free him by using Hot Spring Water, but the Elder refuses to acknowledge him, thinking he is an illusion of Darmani III.[10] However, when he is told his son misses him, he teaches Link the "Goron Lullaby" introduction and implores him to soothe his son to sleep.[9][11][12] Even when unfrozen, the Goron Elder will freeze again if left to stand in the cold.

After the defeat of Goht and the arrival of spring, the Goron Elder can be found unfrozen in Goron Village. He offers the position of tribal patriarch to Goron Link whom he assumes is Darmani.[13]

In Oracle of Ages, a Goron Elder is patriarch of the Gorons in Rolling Ridge who becomes trapped beneath some fallen rocks in the past.[14] The other Gorons tried to break away the rocks, but even with their strength, they could not break it. They require the use of a Bomb Flower,[3] which had not been seen in years. In the present, the Great Moblin built his fortress on the western peak of Rolling Ridge and kept all Bomb Flowers for himself.[15] Once Link defeats the Great Moblin, the Gorons have their Bomb Flowers returned to them. As thanks, Link is rewarded with a Bomb Flower which he takes into the past to free the Goron Elder, who admits that he was not in any trouble at all.[16] After the incident, the Goron Elder can be found at the Goron Shooting Gallery.

In a Linked Game of Oracle of Seasons, a Goron claiming to be one of the Goron Elder's descendants appears within Goron Mountain. Apparently, the Goron Elder had traveled from Labrynna to Holodrum and settled in the mountains there. The Goron holds the Elder's diary, and would have liked to have asked him the meaning of a secret found within. Link can bring this password to the Goron Elder, who, having only thought of it later on in the future, will thank Link for telling him this new secret.[17] After testing his skills in the Goron Shooting Gallery, the Goron Elder gives Link the Biggoron's Sword as thanks for teaching him the secret.[18]

The Elders are a group of Gorons in Twilight Princess that rule the Gorons on Death Mountain along with with the Patriarch.

In Spirit Tracks, a Goron Elder appears in the Goron Village of the Fire Realm, where he lives with his grandson.[1] Like Kagoron, the Elder has a strikingly ashy appearance compared to the other Gorons living in the village.

Upon meeting him, Princess Zelda is quite intimidated, and tries to encourage Link to make a good first impression.[4] After the Goron Child informs his grandfather about Link's Mega Ice quest necessary to qualm the fire geysers in the village,[19] the Elder immediately warms up to Link. In return, he steps aside so Link can use his house as a passage to the Fire Sanctuary.[20]