Not to be confused with Goron Village. 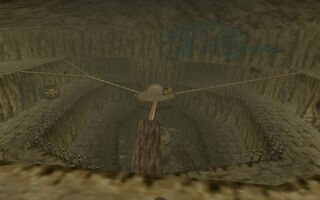 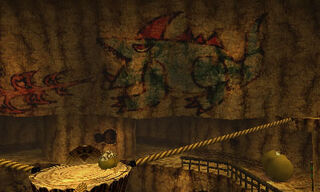 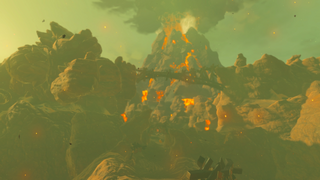 Ocarina of Time
Breath of the Wild

Goron City,(OoT | BotW)[1][2] also known as the Home of the Gorons,(OoT)[3] is a recurring location in The Legend of Zelda series. It is the home of the Goron Tribe.[4] It is located nearby Death Mountain.

Goron City is the main gateway to Death Mountain Crater which leads to the Fire Temple. There is also a portal to the Lost Woods, but its entrance is blocked by rocks that Link must destroy with Bombs. Paintings of Gorons, Dodongos, and other abstract shapes can be seen all around the city walls. The city consists of four floors, with the entrance on the top floor. The lowest floor has two important points of interest: the Goron Shop and Darunia's chamber, which is initially closed off until Link proves his connection with the Royal Family. Within the chamber is a heavy stone monument blocking off the entrance to Death Mountain Crater. Link can move this obstacle once he is an adult.

Also on the bottom floor is a giant vase which spins once Link lights up all of the city's torches. Situated at the center of the city is a platform suspended by ropes where the Spiritual Stone of Fire, also known as the Goron's Ruby, was once displayed; it used to light up the city before Darunia took it away.[5]

When young Link arrives at Goron City, he finds the source of the Goron's troubles: their source of food, Dodongo's Cavern, has been blocked by a giant boulder thus endangering their lives.[6] Their leader, Darunia, locks himself up in his chamber and won't let anyone in unless they are connected to the Royal Family of Hyrule.[7] Once Link shows his proof of connection with the Royal Family, the door opens, allowing Link to speak to the Goron chief. Darunia, though reluctant at first,[8] lets Link help them by having him destroy the Dodongos in Dodongo's Cavern.[9]

After Link defeats King Dodongo and clears the infested cavern, Darunia gives him the Goron's Ruby and calls him a Sworn Brother.[10]

Seven years later, after retrieving the Master Sword, Link returns to Goron City to find that all of its citizens are gone. He notices a lone Goron rolling around the third floor and stops him with a Bomb. Link discovers the Goron is Darunia's son who informs him about the revival of Volvagia, an ancient Dragon who eats Gorons. Due to this situation, Darunia went to the Fire Temple to try and defeat Volvagia; however, while he was gone, all the Gorons were taken by Ganondorf as prisoners into the temple where they would be fed to Volvagia as a warning to those who might oppose him.[11] Darunia's son pleads for Link to go and save Darunia. So, Darunia's son gives him the Goron Tunic, a tunic which lets Link endure the heat of Death Mountain Crater and the Fire Temple indefinitely, so long as it is worn.[12]

Once Link rescues all the Gorons from the Fire Temple, they will return to the city and thank Link for saving them.[13][14]

Goron City is located west of Death Mountain in Eldin Canyon. One hundred years ago, it spared any direct damage during the Great Calamity.[15] A winding road leading from the entrance to Eldin from Trilby Valley paves the way to the settlement. Unlike Goron City's previous appearance, the Gorons no longer inhabit a cave complex, but have instead built a little town surrounding a pool of lava, which is crossed by bridges. The Gorons live and commerce inside of stone shanties. The road passing through Goron City continues to the Abandoned North Mine, where a tunnel further ahead leads to the Stolock Bridge, a long bridge that crosses overhead Goron City before continuing to Death Mountain. A statue of rocks in the likeness of Daruk, the deceased Goron Champion, stands near the Bridge overlooking the City, accompanied by a statue of Darmani III and the Elder's Son, both of Termina, and the once head elder Gor Coron.

Link arrives to Goron City on his quest to free the Divine Beast Vah Rudania from Calamity Ganon's influence. There he meets the Gorons' Boss, Bludo, who explains to him that the Gorons have been using Cannons to drive away Vah Rudania.[17] Bludo was planning to use the Cannon again, but is unable to due to his chronic back pain.[18] He had sent his assistand and Daruk's grandson, Yunobo, to the Abandoned North Mine to retrieve him some painkillers, but he had yet to return.[19] Bludo sends Link to find Yunobo in his stead, beginning the "Divine Beast Vah Rudania" Main Quest. Link manages to find Yunobo and returns to Bludo, who then tells him about Daruk and points to his statue, invoking a Memory of him in Link. However, even after taking the painkillers, Bludo's back is still too sore and he asks Link to tell Yunobo that he is forced to cancel their plans.[20] When Link reaches the Bridge of Eldin, he finds Yunobo being harassed by two Black Moblins.

Later, after Link has boarded the Divine Beast Vah Rudania and defeated Fireblight Ganon, freeing Vah Rudania from its influence, he returns to Goron City and is rewarded for his efforts. Bludo gives him the Boulder Breaker, a sword that Daruk once wielded, which is stored inside of a Treasure Chest in Bludo's house.[21]

In addition to the Main Quest, Link also meets other characters in Goron City who give him other Quests. The Side Quests "The Road to Respect" and "The Jewel Trade", and the Shrine Quest "A Brother's Roast", all begin here.

Goron City's economy is driven by the mining and selling of gemstones to the other races of Hyrule.[22] Tourism to Goron City declines due to the deadly magma bombs spewing from the volcano's caldera.[23]

The Boss's House is the home of Bludo.

The Goron Gusto Shop is a general store managed by Tanko. The store stocks in a few items, including Rock Salt, Cane Sugar and Fire and Ice Arrows. It is also the only Place where Link can reliably get Goron Spice, as Stamm and Yammo only sell it on rainy days.

Protein Palace is an outdoor kitchen run by Aji that specializes in selling food that has been grilled, specifically one Seared Steak, one Roasted Bass and one Toasty Hylian Shroom. Offrak can be found sleeping here at night, implying he has some relation with Aji, though this isn't expanded upon in-game.

Ripped and Shredded is an Armor shop managed by Rogaro that sells the Flamebreaker Armor equipment. Speaking to Rogaro when not wearing any of the flamebreaker armour causes him to panic, so most interactions are cut short until you equip a bit. A Goron named Pyle sits outside it, as he lost his Job as a miner because of Divine Beast Vah Rudania and has nothing else to do.

Rollin' Inn is an inn managed by Tray, who provides a mostly pain free massage that will cause you to feel as "loose as gravel", and gives Link three temporary Hearts and one temporary ring of Stamina, for the cost of 80 Rupees. An elderly Goron named Volcon stands outside of the Inn, encouraging travelers to stay. The traveling Sheikah painter Pikango can be found sleeping here when Link does not have the Memory from the corresponding area, as can Ramella, though she'll only be willing to trade after the "Divine Beast Vah Rudania" Main Quest is complete.

In Hyrule Warriors: Age of Calamity, Link and Zelda go to Goron City in order to ask Daruk to pilot Divine Beast Vah Rudania. However, that is the only mention of Goron City in the Scenario, "Daruk, the Goron Hero," and the characters go to Death Mountain.