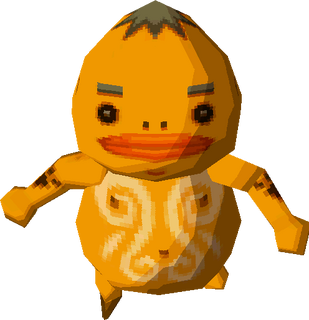 The Goron Child is a young Goron who resides in the Goron Village in Spirit Tracks.[2] He is the grandson of the Goron Elder.[3]

Upon first visiting the Goron Village, the Goron Child informs Link that the entrance to the village is blocked by fire geysers. After Link brings Mega Ice and extinguishes the flames blocking his way to the village, he is granted access to the Fire Sanctuary by the Goron Elder who first notes that Link must prove himself, only to be swayed moments later when his grandson runs into the room, noting that Link was the one whose efforts put out the geysers.[4]

After Link defeats Cragma, the Boss of the Fire Temple, the Goron Child tells him that he wants to meet a Princess and asks him to be brought to a big city.[5][6] The Goron Elder thinks that a trip to Castle Town will help his grandson realize that his village is paradise, something that the his grandson does not understand.[1] When Link brings him to Hyrule's capital city, the young Goron mistakes Lucia for a princess before rewarding Link with a Force Gem. Later, he tells Link that he feels short-changed and homesick;[7] if he cheers him up, the Goron Child gives Link a Goron Amber.[8]