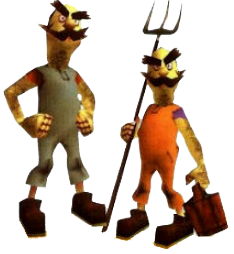 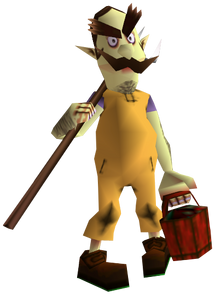 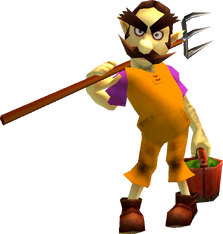 The Gorman Brothers are three brothers in Majora's Mask.[citation needed]

Two of them, referred to as the Gorman Brothers by the Bombers' Notebook,[1] are found on a racing track off Milk Road called the Gorman Track, while the other one, known only as Gorman, is the leader of the Gorman Troupe.

The two Gorman Brother are known for their devious nature.[2] They do everything in their power to hinder the competing Romani Ranch, such as breaking bottles of Milk to prevent them from being delivered; however, Cremia remains oblivious as to the perpetrators of these acts.[3] It is also likely that the two brothers are the ones responsible for blocking the path to the Ranch with a giant Boulder,[4] preventing Romani Ranch from bringing supplies to the town's Milk Bar.[5]

The Gorman Brothers are dismissive of those who show up at the Gorman Track without a horse.[6] Moreover, they continue to demonstrate their malicious intents by suggesting that if the visitor is in need of a horse, they could just steal a horse from Romani Ranch as the act would likely go unnoticed.[7] If Link is wearing the Goron Mask, they will be terrified of him and will tell him that even though he cannot race without a horse, he is free to look around.[8] They also sell Milk for 50 Rupees and mention that the Milk produced at Romani Ranch is watered down and not worth drinking, while claiming that theirs is always fresh and full of vitamins.[9] Unlike Romani Ranch, the Gorman Brothers do not show hospitality to the citizens who are fleeing from Clock Town during the Final Day.[10]

When Link first meets the brothers, they treat him with a cocky and arrogant attitude as they make fun of the size of his horse, Epona.[11] They challenge him to a race for 10 Rupees, confident that they will win.[12] When Link beats them, they hand over the Garo's Mask, so long as the young hero promises to not tell anyone where he got it from.[13]

If Link helped Romani defend the Cows from the Ghosts on the night of the First Day and accepts to accompany Cremia on the Milk delivery to town on the Second Day,[14] the Ranch owner and Link discover that the road to Clock Town has been blocked, most likely due to the Gorman Brothers. As such, they are forced to take a detour through the Gorman Track.[15] The Gorman Brothers, wearing Garo's Mask while riding on their horses, chase the wagon and try to break the cargo of Milk bottles that Cremia is trying to deliver to the Milk Bar.[16] Link chases them off using his Hero's Bow and Arrows, and the pair is able to escape the Gorman Brothers without any major harm done. If Link succeeds in protecting the Milk from the brothers, they will not appear on the Final Day, and instead a sign will be present at the Gorman Track stating that riding lessons have been temporarily suspended.[17] However, if he fails to protect the Milk delivery, the Gorman Brothers will have taken over the Milk business.[18]

If Link talks to them using the Troupe Leader's Mask, the Gorman Brothers will get sentimental and talk about their middle brother, Gorman.[19][20] They will even show a sign of remorse for all the malevolent deeds they have done, but then mention that they cannot get emotional over such things. Thus, they ask Link to stop making them feel uncomfortable and to take the Mask off.[21] Wearing the Troupe Leader's Mask also prevents them from attacking Cremia's wagon on the night of the Second Day.

The middle sibling of the Gorman Brothers,[22] Gorman, seems to be kinder and more benevolent than his brothers, despite that he might not show it when Link first talks to him.[23] Unlike his brothers, he was no good at handling and taking care of horses,[24] so he left the ranch life to join the world of show business after hearing the mother of Lulu sing the famous melody of "Ballad of the Wind Fish".[25][26]

If Link comforts him by playing the "Ballad of the Wind Fish" during a sound check at the Milk Bar, he gives the young hero the Troupe Leader's Mask as a reward for helping him remember why he joined the world of show business.