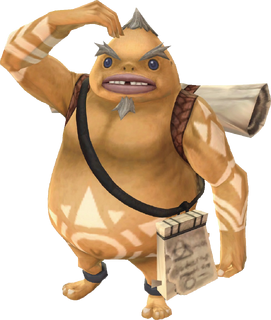 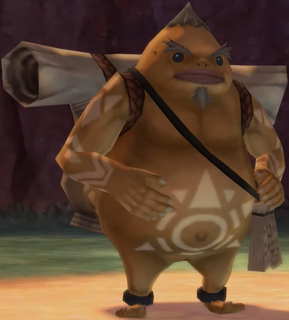 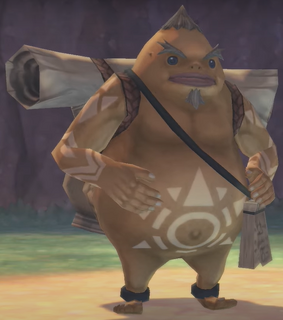 Gorko is a character in Skyward Sword.[2] He is a traveling archaeologist Goron, who traverses the surface studying the history of the land and various devices, attempting to discern the history behind the ancient civilization. He is especially interested in the myth of the "Isle of the Goddess", which is actually supposed to be Skyloft, and of related artifacts. Link encounters him several times during his quest.

He is first encountered in the Sealed Grounds, where he is being pestered by a small group of Bokoblins.[3] After Link saves him, Gorko notes that a number of weird events have been occurring recently, stating that it is uncommon to encounter groups of Bokoblins within the forest and that before he ran into the young hero, he bumped into another being who looked similar to Link.[4] As a reward for rescuing him,[5] he explains to Link about an advanced civilization living on an island in the sky called the Isle of the Goddess, which he learned about from reading ancient writings.[6][7] The Goron tells the young hero that the Bird Statues are used as landmarks for those traveling between the sky and the surface,[8] and were placed to give travelers a route back to the island.[9] Gorko says that the statue near the Sealed Temple is special, because it holds the ability to activate all of the others statues on the surface.[10] He is surprised when Link activates the statue when he walks up to it.[11]

Link later meets Gorko again within the Deep Woods, where he tells the young hero that he is researching Goddess Cubes,[12] and then proceeds to recite ancient text containing directions on how to activate the Cubes for Link.[13] Upon noticing that Link holds a Sword, the Goron asks the young hero to help him solve the mystery of the Cube.[14] After Link causes the Goddess Cube to turn into light and shoot up into the sky, Gorko is once again surprised and wonders where the object shot off to, requesting that he come see him if he discovers more about the Goddess Cubes while on his quest.[15]

Gorko can later be found outside the blocked entrance to the Temple of Time of Lanayru Desert, hoping to find a way inside to inspect the sacred Temple. He informs the young hero that he saw a human who lived on the Isle of Goddess, which he supports by noting it wore clothing similar to those spoken about in ancient texts, enter the temple with another person.[16] Gorko tells Link that he wanted to follow them, but an explosion destroyed the Temple's entrance and prevented him from pursuing the two.[17] After Impa destroys the Gate of Time, Gorko can be found standing outside the Temple, expressing disbelief that Link was able to access the Temple's interior through a secret passage.[18] The archaeologist states that he initially gave up and left, but an explosion caused him to return to the Temple of Time's entrance, which was now cleared.[19] He proceeds to explore the Temple of Time's interior, but shortly returns to the Sealed Grounds.

Following his first encounter with The Imprisoned, Link finds Gorko within the small glade between the Sealed Grounds and Faron Woods, where the Goron is found observing a swarm of Blessed Butterflies, expressing disappointment that he cannot create a tune.[20] After Link plays the Goddess's Harp, a Gossip Stone, which Gorko recognizes as being mentioned in the ancient manuscripts, appears. The archaeologist proceeds to give Link an explanation on Blessed Butterflies,[21] Gossip Stones and Goddess Walls.[22][23]

He is again encountered much later near the entrance of the Fire Sanctuary of the Eldin Volcano Summit, suspecting the area to have a lot of Goddess Cubes nearby.[24] He is however unable to continue as the path is being blocked by pillars of fire.[25] Fortunately, Link is able to extinguish these pillars of fire by pouring water, which he obtained from a small spring within the summit, onto the tongues of the frog statues above the flames.[26][27] Upon reaching the Sanctuary, the two discover its entrance to be protected by another pillar of flames along with a third frog statue. However, the third frog statue is larger than the two before it, and requires a larger quantity of water than an Empty Bottle can hold.[28][29] After Link uses the Water Basin to douse the flames, thus clearing the entrance to the Fire Sanctuary, Gorko courteously lets Link enter the dungeon first and waits outside.[30]

Gorko's name is a portmanteau of Goron and Marco, as a reference to Marco Polo, a famous explorer.