Zelda Wiki
Register
Don't have an account?
Sign In
Advertisement
in: Enemies, Common Enemies and Traps, Devils,
and 9 more

This article is about the regular appearance of Goriyas. For other uses, see Goriya (Disambiguation). 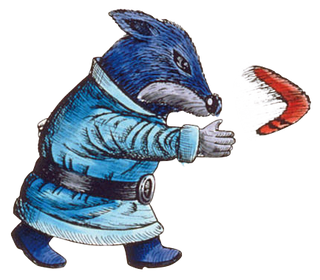 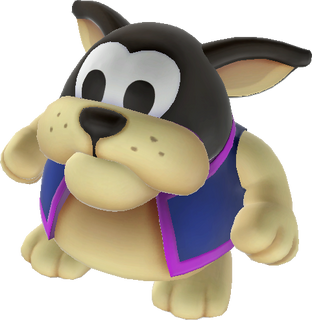 Four Bombs (TLoZ)
One Rupee (TLoZ)
Clock (TLoZ)
Heart (TLoZ)
Fairy (TLoZ)
Goriyas,(OoS)[2] also known as Red Goriyas,(TLoZ | TAoL)[2] are recurring Enemies in The Legend of Zelda series. They are devils that have mastered the Boomerang as a weapon,[3][4] making them dangerous in both short- and long-range combat.

In The Legend of Zelda, Red Goriyas appear only in Dungeons. They generally attack in groups of three or more. Link finds the Boomerang by defeating a group of Red Goriyas in Level 1. When defeated, Red Goriyas may drop either a Heart, one Rupee, four Bombs or a Clock.[note 1]

In some Dungeons, a hungry Red Goriya will be blocking the passage to the next room. When talked to, the Goriya's stomach grumbles,[6] vaguely hinting that the creature is hungry. It will refuse to budge until fed. To satisfy the monster and obtain entry, Link must offer it Food purchased from a Shop.

In The Adventure of Link, the side-scrolling angle changes typical Goriya attack patterns. Instead of tossing their projectiles in random directions, they specifically target Link, and can have multiple Boomerangs in the air at one time, unlike their past incarnations. They can throw Boomerangs on either the "bottom" or "top" level, in the same way most bipedal enemies attack. Depending on the Boomerang's height, Link must choose to duck or stand to block the attacks with his shield.[7] If a Boomerang is thrown at the bottom level, it will return to the Goriya on the top level, and vice versa.

Goriyas now tend to appear in caves and fields more often than dungeons,[8] and generally only appear alone or with a single partner instead of larger groups, perhaps due to the fact that they are now more challenging opponents.

The Item Trader is a Goriya that trades items to Link on Toronbo Shores in Link's Awakening.[9]

In Oracle of Seasons, Goriyas appear in the Gnarled Root Dungeon. They look identical to Moblins, suggesting a relation between the two types of monster. They behave like their original incarnations in The Legend of Zelda; wandering around the room and suddenly throwing Boomerangs to attack Link. Many of the enemies that appear in the Gnarled Root Dungeon evoke those that appeared in Level 1 of the original NES adventure, and these are no exception.

Also in the Gnarled Root Dungeon, a pair of bull-like Goriyas known as the Brother Goriyas appear as mini-bosses.

A Goriya briefly appears in the "Having a Ball" episode of Captain N: The Game Master. After Link, Princess Zelda, Kevin, and Princess Lana arrive at the tunnel leading to the Island Palace, a Goriya appears and rapidly begins to throw boomerangs nonstop toward the heroes. The boomerangs impede the group's progress, so Link uses his Magic Shield to block the attacks while the rest of the party follows closely behind. As the heroes approach the Goriya, Kevin uses his Zapper to defeat it, allowing them to continue to their destination.

In the The Legend of Zelda comics by Valiant Comics, Goriyas resemble their depiction in The Adventure of Link. They first appear in "Missing in Action" as one of the enemies that go after Princess Zelda and the Triforce of Wisdom. To the First Power also shows these foes capturing Link outside one of the Underworld entrances under the orders of a Wizzrobe, and are later seen attacking Princess Zelda while she is inside Level 1. After Link manages to take the Triforce of Power from Ganon in "The Power," several of Ganon's Goriya minions offer to serve Link, as they believe that he holds more power than their master,[10] but Link refuses.[11] However, when Link heads to a palace to search for Ganon, he is greeted outside by the same group of Goriyas that had offered to serve him.[12] This time, he accepts their aid,[13] and the Goriyas give him a robe similar to that of Ganon's.[14]

Goriyas appear once again in "Queen of Hearts," where they battle against Link and Queen Seline to keep them from breaking the magic container that will give the queen her magical powers back. They last make an appearance in Day of the Triforce as two Goriyas try to eat a captured Miff in Death Mountain.[15]

Goriyas are briefly mentioned in The Shadow Prince. When the King of Hyrule calls an urgent meeting to take the Triforce of Wisdom to the Fifth Castle of Ancient Hyrule, he mentions that a recent thunderstorm caused Goriyas to fall from the sky, most likely due to the fact that Ganon is becoming more powerful.[16]

In Zelda's Adventure, Goriyas resemble purple apes with white hair that throw massive Boomerangs. In this game, Zelda can obtain the Boomerang the Goriyas use by defeating a small group of them in a clearing west of the Forest of Ogbam.