Not to be confused with Gonguron, a Goron in Breath of the Wild. 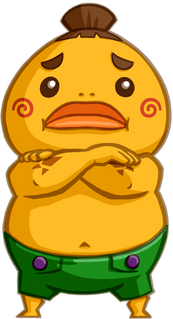 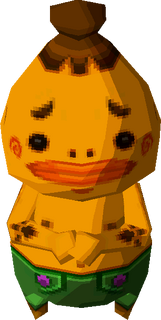 Gongoron is a character in Phantom Hourglass.[2] He is the Goron that helps Link in the Goron Temple.

Gongoron is the son of Biggoron, the Chief Goron of Goron Island. At first, Gongoron resents Link being a Goron; however, once Link saves him, he appreciates Link. After Biggoron asks him to show Link the way to the Goron Temple, Gongoron goes into the temple and gets caught by monsters. When Link reunites with him, he is able control Gongoron during a part of the temple and during the boss fight.

After Goron Island, Gongoron goes to Dee Ess Island to work part time in the Goron Game in which he can again be played.

Gongoron's Japanese name, Maigoron, is likely a portmanteau of 舞 (Mai), the Japanese word for "wheel" (fitting his ability to curl up into a ball and roll around), and "Goron."