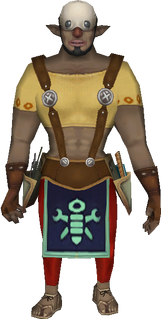 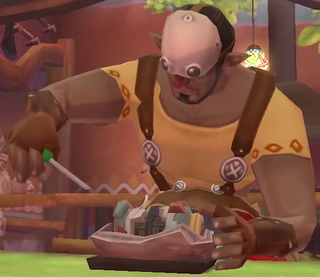 Gondo is a character in Skyward Sword.[3]

Gondo is the local craftsman of Skyloft, descending from a family whose business involved in repairing broken equipment, or upgrading various equipment at the Scrap Shop in the Skyloft Bazaar. Link may visit him to Upgrade some of his items for a price.

However, his family has also been known for owning an Ancient Robot named Scrapper. As Gondo explains, Scrapper was used by his grandfather to go down to The Surface, and bring back items or supplies for the village. Unfortunately, the Robot fell into decay, eventually becoming nonfunctional.[4] Gondo, despite his mother Greba's complaints, spends his day tinkering with the Robot so that it can become functional again.

After obtaining the Goddess's Harp, Link is instructed to talk to Gondo about the Robot, so that he can use it to find and bring back the Windmill Propeller from The Surface. Upon doing so, Gondo at first thinks that Link is going to mock him for his story about the Ancient Robot,[5] but eventually reveals to the hero that his grandfather told him that the sap from a Ancient Flower could make the Ancient Robot operational.[6] If Link reveals that he has an Ancient Flower, Gondo will quickly use it on Scrapper, making the Ancient Robot functional once again. However, Scrapper refuses to serve Link. Fortunately, upon seeing and becoming infatuated with Fi, the Ancient Robot agrees to serve Link and Fi.[7]

"Gondo" is the Shona word for eagle. It could also be derived from Condor, a desert bird.