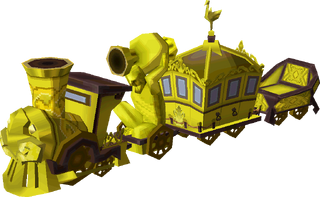 The full Golden Train, as seen in Spirit Tracks

Golden Ship
Golden Trains are a recurring Item in The Legend of Zelda series.[2][1][note 1]

In Spirit Tracks, the Golden Train is the name given to the Spirit Train once it has been outfitted with the following Train Cars:

The Train Cars can be attached to the Spirit Train upon purchase from Linebeck Trading Company, or at any time thereafter at Alfonzo's house in Aboda Village. Used together, they give the Spirit Train a durability of eight Hearts, up from its default of four Hearts. Aside from this boost in durability, the Golden Train is merely a change in appearance to suit the player's personal tastes.

In similar fashion to the other train Item Cards, Golden Trains cannot be purchased in the Item Card Shop and can only be obtained by completing a battle that has a Golden Train as its victory reward.[6] Because the Grand Travels Map is split between Spirit Tracks and Phantom Hourglass-based sections, Golden Trains only appear as victory rewards of battles to the left on the pink dividing line. When a Golden Train is used, it activates an Engine Power that causes all restrictions on Warriors to be lifted across the entire map, which means that all battles that required a certain Warrior to be used now allow any Warrior to be played.[1][7] The Engine Power provided by the Golden Train runs for two battles and cannot be overridden with another Engine or Captain Power.[8]