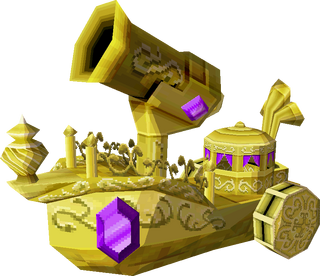 The full Golden Ship, as seen in Phantom Hourglass

Phantom Hourglass
Transportation
Hyrule Warriors Legends
Raising the amount of damage that can be taken before lowering in battle rank.[1]

Golden Train
Golden Ship are recurring Items in The Legend of Zelda series.[2][1][note 1]

In Phantom Hourglass, the Golden Ship is the name given to the SS Linebeck once it has been outfitted with the following Ship Parts:

Golden Ships can be obtained either by purchasing them from the Item Card Shop for 20,000 Rupees, or by getting one as a battle reward. Because the Grand Travels Map is split between Spirit Tracks and Phantom Hourglass-based sections, Golden Ships only appear as victory rewards of battles to the right on the pink dividing line. When a Golden Ship is used, it activates a Captain Power that causes every battle across the Grand Travels Map to allow for a higher amount of damage to be taken before lowering the battle rank, which makes it easier for Warriors to achieve higher ranks while still taking more damage.[1][6] The Captain Power provided by Golden Ships runs for three battles and cannot be overridden by another Captain or Engine Power.[7]