Zelda Wiki
Register
Don't have an account?
Sign In
Advertisement
in: Enemies, Enemies in Oracle of Seasons, Enemies in The Minish Cap,
and 2 more
English 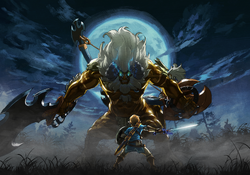 Artwork of a Golden Lynel in Breath of the Wild

Oracle of Seasons
The Minish Cap
Breath of the Wild

Freshly-Picked Tingle's Rosy Rupeeland
Golden Monsters are recurring Enemies in The Legend of Zelda series.[1][2][name reference needed] They are much more difficult to defeat than their regular counterparts, with improved speed, power or health. In return, the reward for defeating these rare monsters is substantially higher. Their appearance is usually tied to the activation of an event, such as a Kinstone Fusion in The Minish Cap.[3]

In Summer, the water around Gnarled Root Dungeon recedes, revealing a cave with a golden-robed Old Man inside. After Link talks to him, four different Golden Monsters will appear around various regions of Holodrum. When all four have been defeated, Link can return to the Old Man to receive a Magic Ring which, when appraised by Vasu, becomes the powerful Red Ring.[4]

Three types of Golden Monsters appear across Hyrule after certain Kinstone Fusions in The Minish Cap. They are Red Octoroks, Tektites, and Ropes. After one is defeated, they will drop a large sum of Rupees.

In Master Mode in Breath of the Wild, Golden Bokoblins, Golden Moblins, Golden Lizalfos, and Golden Lynels appear as a stronger variant than silver enemies. Unlike the other variants, Golden Monsters have a stronger resistance to status effects, such as Shock, Ice, and Fire. They can recover from being shocked faster, thaw out of ice faster, and are not as susceptible to flames.

In Freshly-Picked Tingle's Rosy Rupeeland, each island spawns a different Golden Monster, making them eleven in total. These monsters drop much more Rupees.