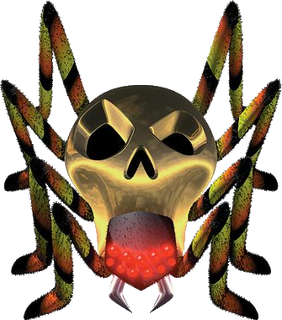 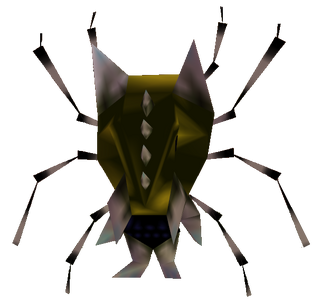 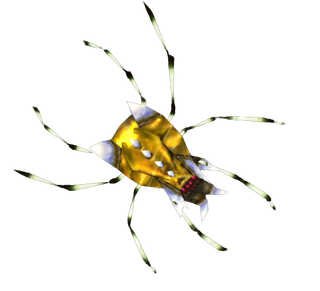 Bow
Boomerang
Hookshot
Sword
Gold Skulltulas,(OoT | MM | HW)[name reference needed] also known as Spiders of the Curse,[1] are recurring Enemies in The Legend of Zelda series. They are gold-backed Skulltulas that, when defeated, leave behind a Token or Golden Skulltula Spirit.

In Ocarina of Time, Ganondorf had Gold Skulltulas hidden all throughout Hyrule and are known to curse people. One family was once fabulously rich, but were cursed due to their greed and have taken the form of Skulltulas.[2] When Link visits the House of Skulltula in Kakariko Village, he speaks to the Cursed Rich Man, who explains that the only way the Ganondorf’s curse on him and his sons will be lifted is if all of the Gold Skulltulas around Hyrule are destroyed.[3] Link must collect Tokens from the 100 Gold Skulltulas in Hyrule, freeing each family member from Ganondorf’s curse one by one by collecting a certain number. By doing so, Link will receive rewards from each of the father's sons.

Gold Skulltulas can be located by listening for their distinctive scraping sound. They can be found from fields to dungeons, although they will only appear above ground during the night.[4] Gold Skulltulas like soft Soil, and can be drawn out by baiting them with Bugs.[5] They can also be found inside crates. Some Tokens can be collected by just walking up to them, but some require ranged weapons to be reached. A small Gold Skulltula icon will appear next to an area's name on the map once all the Gold Skulltulas in that area have been defeated and their Tokens collected.

Gold Skulltulas appear in the Swamp Spider House and the Oceanside Spider House in Majora's Mask, which contain 30 each. They drop Golden Skulltula Spirits when defeated. Gold Skulltulas can be located by listening for their distinctive scraping sound. They can hide inside Pots, Beehives, or soft Soil. Some out-of-reach Gold Skulltulas require Link to roll into a wall to drop them to the ground level.

By obtaining the 30 Golden Skulltula Spirits in the Swamp Spider House, Link obtains the Mask of Truth from the Cursed Rich Man who was cursed when he entered the house in search of clues to become rich.[6] In the Oceanside Spider House, Link can obtain the Giant's Wallet if he collects all 30 Golden Skulltula Spirits during the First Day, with a Silver Rupee being awarded for completing it again on the First Day in subsequent cycles. On the Second Day, he will receive a Purple Rupee, and a Red Rupee on the Final Day.

In Majora's Mask 3D, the Giant's Wallet can be obtained on any day. If the Adult Wallet has not been previously obtained, Link will instead receive it, while the Giant's Wallet will now be obtained from the Banker. Collecting all the Golden Skulltula Spirits a second time at either the Swamp Spider House or the Oceanside Spider House will award Link with a Fishing Hole Pass.

In Hyrule Warriors, Gold Skulltulas appear throughout many battles in the game, in both Legend Mode and Adventure Mode, and behave similarly to their previous incarnations. A total of 100 Gold Skulltulas (with at least 60 more added through DLC) appear in the game,[7] and appear only after certain criteria have been met. When a Gold Skulltula appears, a spider web appears on the HUD map, indicating their general location.[8] The exact locations of the hidden Gold Skulltulas are indicated by the noise of their scratching legs. However, after a certain period of time, the Gold Skulltulas will disappear and will not reappear until the battle is reset and the requirements are met again.

Upon completing all of the Legend Mode Scenarios the first time, Hero Mode is unlocked along with additional Gold Skulltulas. These Gold Skulltulas require the difficulty setting be set to Hard or Hero Mode, and require certain characters or weapons to be present before they may appear. The criteria for their appearance in Legend Mode Scenarios is visible on the Select Scenario screen.[9]

The Legend Mode and some Adventure Mode scenarios have two Gold Skultulas to find. However, only one can be found during a single playthrough of the scenario, even if the conditions for both Gold Skultulas are met.