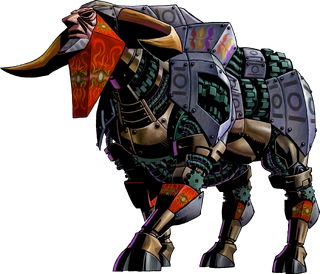 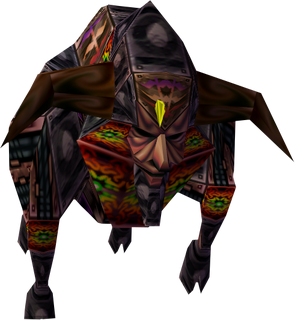 Goht is the Boss of Snowhead Temple in Majora's Mask.[2][note 1] It is a giant mechanical creature with resemblence to a goat or bull. It is responsible for keeping the second of the Four Giants prisoner, and cast a curse that is causing the abnormally long and cold winter at Snowhead, which threatens the lives of the native Gorons living there.[4]

When Link reaches the boss room, he finds Goht frozen. He must use a Fire Arrow to melt the ice block. The monster will then thaw, come back to life while breaking out of the rocks surrounding it, and start charging around the course in an attempt to tackle Link.

To defeat Goht, Link must use the Goron Mask to chase the beast down by rolling after it.[5] There are many Magic Jars around the room to replenish Link's Magic Meter, depleted by the rolling. Goht can be harmed by being rolled into with Goron Link's spikes. To prevent this attack, Goht will launch a homing lightning bolt. This attack streaks forward and then doubles back to strike Link. It is possible to dodge this attack by moving to the side quickly as it approaches. After enough hits, Goht will be temporarily knocked down, leaving him open to attacks. Link can also attack Goht by using Bombs or the Bow. However, the timing required makes this method impratical.

Goht will become gradually harder to follow as the battle goes on. It will begin to kick up rocks, which will damage Link and stop him from rolling. After taking more damage, stalactites will also begin to fall from the ceiling. These only damage Link if they fall directly on him, stopping him if he hits them while rolling. Near the end of the fight, Goht will begin dropping Bombs in addition to the rocks and stalactites. It is possible to approximate Goht's damage level by looking at how much black smoke is coming out of it.

If Link falls too far behind, Goht will stop and wait. When Link enters Goht's field of view, the boss will fire a lightning bolt at Link. This can be easily dodged by swerving side to side. Goht will continue the assault until Link reaches it, at which point it will resume its stampede. If Link falls behind for too long, the boss will run back toward him. If Goht reaches him, it will throw him over itself with its horns and continue onward.

Once Goht receives enough damage, it will malfunction and careen around the room, then crashing into a wall while causing a large number of boulders to fall on top of it. Link will then receive a Heart Container, as well as Goht's Remains, releasing the second of the Four Giants.[6] Afterward, the icy blizzard coming from the Snowhead Temple will be sealed off,[7] and the Spring will return to Snowhead.[8][9]

In Majora's Mask 3D, an eye was added to Goht's back, which acts as its weak point when stunned. The eye can be shot with Arrows if Goht falls on its belly once Goron Link falls on top of it while rolling. The eye can also be attacked with the Sword or punches should Goht fall on its side by hitting its legs repeatedly. However, Goht can still be defeated purely by rolling into it while is still running.

"Goht" is pronounced like "got". This is a play on the word "goat", which Goht is similar in appearance to.