It has been suggested that the portion of this page concerning Red Gohma should be made into its own page. Should the target page already exist, this content should be merged into it where appropriate. Discuss this on article's talk page.

It has been suggested that the portion of this page concerning Blue Gohma should be made into its own page. Should the target page already exist, this content should be merged into it where appropriate. Discuss this on article's talk page. 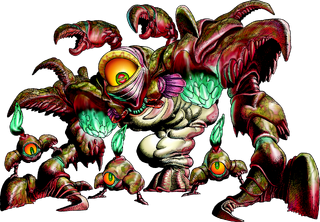 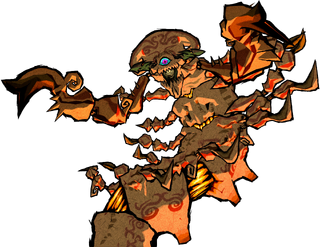 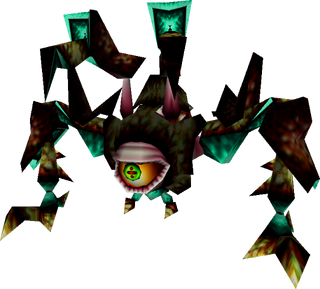 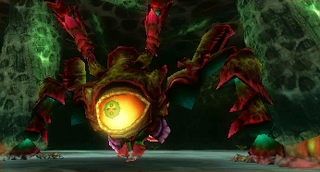 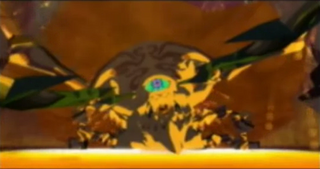 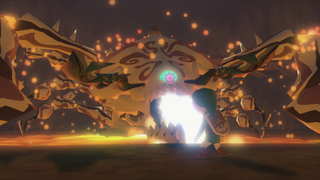 A Gohma makes its first appearance in The Legend of Zelda. Its hard shell will repel all attacks, but its single eye is vulnerable to Arrows shot with the Bow.[5] Due to this weakness, Gohma frequently keeps its eye closed, and attacks by shooting beams from a distance. There are two varieties of Gohma in this game, those being red and blue; the red Gohma can be killed by a single Arrow from the Bow, while the blue one takes three Arrows to kill.

In the First Quest, a red Gohma is the boss of Level 6, and also appears as a mini-boss in Level 8 .

In the Second Quest, a red Gohma appears as an enemy in Level 5 and as a mini-boss in Level 7, while a blue Gohma is the boss of Level-6.

In Link's Awakening, two Gohmas appear as the main Guardians of the fifth Dungeon, Catfish's Maw. They move back and forth sideways with their eyes constantly closed, and occasionally try to ram into Link. Only the Gohma closest to Link will try to attack. They will also sometimes open their eyes to release a fireball, which also makes them vulnerable to the Hookshot. Playing the "Ballad of the Wind Fish" causes them to instantly open their eyes.[verification needed]

Additionally, Link could also use a Bow and fire Arrows into their eyes, which appears to deal more damage than the Hookshot.[verification needed]

Parasitic Armored Arachnid: Gohma debuts as the first boss enemy Link will encounter in Ocarina of Time. After the Great Deku Tree refuses to place the Spiritual Stone of the Forest into Ganondorf's hands, the King of Thieves curses the ancient tree with a monstrous, Tektite-like creature,[6] Gohma. With the creature ravaging the inner body of the Deku Tree, spreading her offspring, scattering her web, and leeching on the Tree's life,[7] the Great Deku Tree has no choice but to request for Link's help with the aid of Navi the fairy. Queen Gohma is found on the deepest floor inside the Great Deku Tree, resting atop the ceiling.

When Link confronts her, he discovers she has one weakness: her eye is vulnerable when it turns red.[8] By shooting at her red eye with a Deku Seed via the Fairy Slingshot, Gohma will be stunned, leaving her open to attack from Link's sword or Deku Sticks.[9] After being hit at least once, Gohma will climb onto the room's ceiling and, if she is not stunned with a Deku Seed in time, she will attempt to hatch three Gohma Larva to aid her in battle. However, there is a strategy to defeat Gohma faster that only requires one Deku Stick. Once Gohma is stunned, Link must jump strike with the Deku Stick and then do multiple shield stabs (done by attacking with the sword while holding R but not Z-Targeting). Another strategy is to repeatedly land a hit at the very last frame before Gohma gets back up until she is defeated, though this requires perfect timing. It is possible to kill Gohma on the first Critical Point both ways. The amount of time Queen Gohma remains stunned for varies according to the technique administered: two seconds for using a Deku Nut, five if Link fires a Deku Seed with his slingshot while her eye is red, and around eight if she is shot whilst hanging from the ceiling.

After Link strikes Gohma's eye enough times, she will be defeated, causing the curse on the Deku Tree to break. As a reward, Link receives a Heart Container and the Kokiri's Emerald from the Great Deku Tree before he passes away.[10]

Gohma also makes an appearance inside the Dancing Dragon Dungeon in Oracle of Seasons.[11] However, this time around, the beast has an extra appendage, a deadly claw. If Link runs in front of her, she will charge and grab him, then throw him to the ground causing damage. The claw can be removed by slashing with the sword. Additionally, the Roc's Feather can be used to jump over the claw. Once the claw is destroyed, the Slingshot can be fired at its open eye, while avoiding the larvae it summons. Defeating Gohma yields the fourth Essence of Nature, the Soothing Rain.

In The Wind Waker, Gohma is placed by Ganondorf below the resting spot of the Spirit of the Sky, Valoo, high on Dragon Roost Island's peak, without the Sky Spirit knowing about it. Gohma's presence repeatedly torments Valoo and thus angers him enough that he becomes violent and unpredictable. The Sky Spirit causes trouble, confusion and panic among the Rito, the protectors of Din's Pearl. Link offers to help the Rito, and when he reaches the boss room inside Dragon Roost Cavern, he finds an impressive, lava-resistant, Magtail-like monster as his foe. Despite its menacing stature, Link manages to crack open Gohma's armor and delivers many lethal strikes to its eye with his sword, eventually killing her.[12]

To defeat Gohma, Link must wait for an opening to grapple onto Valoo's tail, which dangles from the roof, while avoiding Gohma's pincers. When Link swings to safety, part of the chamber's ceiling falls onto Gohma, cracking her armor. After repeating this process several times, Gohma's armor will be destroyed. At this stage, Link grapples Gohma's eye so he can access it with his sword. Once the eye is in range, Link must attack it with his sword until the boss perishes by hardening and exploding.

For defeating Gohma, Link's prize is a Heart Container, and an apology as well as Din's Pearl from the Rito Chieftain's son, Komali. Over the course of the game, Gohma must be defeated twice, once in Dragon Roost Cavern and once in Ganon's Tower to complete the game. If Link manages to capture a photograph of Gohma with his Picto Box and make it into a figurine, he discovers that her armor is actually white with pale, purplish markings. The impression of Gohma's seemingly gold armor and brass markings was created by the lava in the cavern.

In Four Swords Adventures, Gohma appears in two variations: the first type aimlessly wanders about the fields of Hyrule, and the second type acts as a mini-boss that shoots fireballs at Link. Both types of Gohma can be harmed only by shooting Arrows at its large open eye.

Gohma also appears in BS The Legend of Zelda. A brown Gohma first appears as the boss of Level-6, and can be taken out if it is shot in the eye with a single Arrow. Two blue Gohmas also appear in Level-8 as a double mini-boss battle. They are much more resilient, and will take three Arrows in each eye, or two Silver Arrows before their defeat.

In "Cold Spells", after Ganon traps Link and Princess Zelda in a glass container, he calls a Gohma to exterminate the heroes. However, just as Gohma is trying to get Link out of the container, Spryte arrives in time and shoots a powerful bolt of energy at the Gohma, allowing Link to escape.[13] Ganon then shoots fire at Link, which the young hero evades just in time and causes the fire to hit Gohma instead, instantly defeating the giant foe. Another Gohma makes an appearance in the "Stinging a Stinger" episode after Ganon locks up Sleezenose, Link and Zelda inside the monster's lair.[14] With Gohma slowly approaching the group, Zelda gets out a Magic Rope from her pouch and Link a Boomerang while the young hero orders Sleezenose to use his lockpicks to open the gate.[15] Zelda then ties the rope around one of Gohma's horns, which causes the creature to spin her around the room. Link takes this opportunity to use the boomerang and make a giant stalactite fall on top of Gohma, allowing Zelda to continue to spin around until all of the rope is tied around the beast. This immobilizes the Gohma and gives the group a chance to escape its lair.

In "The Moblins are Revolting" episode, two Gohmas make a brief appearance after a Moblin frees all of the monsters from the Evil Jar. These Gohmas can be seen grabbing the Evil Jar from its base and moving it to another covert.[16]

A single Gohma appears in the story of To the First Power from The Legend of Zelda comics by Valiant Comics. When Zelda enters Level-1 to train against Ganon's minions, a Gohma appears behind her.[17] Surprised that a Gohma has appeared in such an early level,[18] the princess tries to fire a Sword Beam at the foe's eye, but to no avail. Zelda manages to escape the Gohma's grasp and eventually finds the labyrinth's item: the Magic Bow. This allows the princess to defeat the Gohma with a single shot and make her way into the final chamber of the maze.[19]

In The Crystal Trap, Princess Zelda encounters a Gohma as she's traveling through the Desert and accidentally steps on a hollow surface, which houses the creature. According to the book, Gohmas are known to be clumsy creatures, but once something or someone steps on their territory, they will never give up. The princess, knowing this, begins to circle around the Gohma, which eventually causes for it to fall on its back due to its dizziness. Noticing a faint white spot on its belly, Zelda fires an Arrow from her Bow to quickly defeat the monster.

In the Ocarina of Time manga by Akira Himekawa, Gohma can talk, and her true form was a mere scarab, apparently transformed from dark magic. She is first seen attacking, entering, and eating the Great Deku Tree. She was originally sent by Ganon to obtain the Kokiri's Emerald until she is defeated by Link and Mido.

In Hyrule Warriors, Gohma appears as a giant boss that is encountered in several Legend Mode and Adventure Mode stages. In Legend Mode, it appears as a boss in the Scenarios "The Sorceress of the Woods", "Ganondorf's Return", and two in "Darkness Falls".

Gohma is invulnerable to most attacks, which it blocks with its foreleg shields to protect its eye. It attacks with a large swipe, rapidly spinning, charging, jumping into the air to crash down, or by firing a laser beam from its eye vertically or horizontally. It may also stop to charge a powerful blast from its eye as well. These attacks will also harm nearby enemies. The only time it is vulnerable is after firing a laser beam or stopping to charge an attack, which causes its red iris to turn bright blue. Shooting its eye with the Bow in this window of time will cause it to hysterically flip over and expose the Weak Point Gauge.

Gohma will usually drop the Gohma's Acid Material when defeated, and rarely the Gohma's Lens Material.