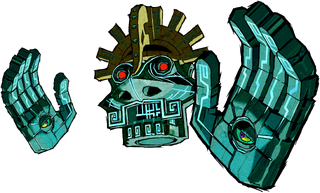 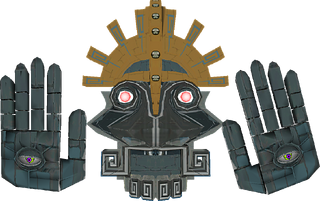 Gohdan is a Boss in The Wind Waker.[1] It is the guardian of the Tower of the Gods, and is the final test that Link must pass before being acknowledged as a hero worthy of wielding the Master Sword.

Gohdan uses its hands to push Link into the electric pits on the sides of the room. It can also perform a clapping move to strike Link from either side. After receiving some damage, Gohdan attacks using a series of exploding fireballs from its mouth.

To defeat it, Link must shoot at the eyes on both hands with his Bow, disabling them temporarily. After he shoots both hands, Gohdan's eyes become vulnerable to Arrows. After shooting both eyes, Gohdan crashes to the ground, where Link can then throw a Bomb into its mouth. Each time Gohdan is knocked down, its hands recover faster than before. If Link runs out of Arrows or Bombs during the fight, Gohdan will drop a bundle of them from its nostrils: however, this will also return to life either of the two hands that Link had deactivated thus far, bringing them back into the fight.

After three blasts to the mouth, Gohdan will admit defeat and declare Link the winner. Retreating into the wall from which it emerged, it dispenses a Heart Container to the hero as a final gift and grants him access to the roof of the tower, where Link rings a bell that causes a portal leading to Hyrule to open in the waves below.