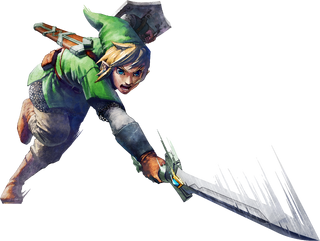 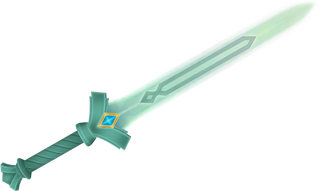 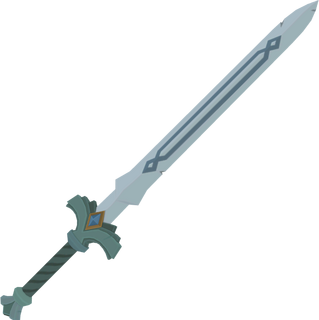 The Goddess Sword is a recurring Item in The Legend of Zelda series.[1][2] It is a legendary blade that was crafted by the Goddess, Hylia, to aid her Chosen Hero.[3][4] To this end, it is inhabited by a spirit known as Fi. In order to defeat the Demons which threaten The Surface, it is eventually tempered into the Master Sword by Link.[5] The Goddess Sword undergoes several stages to reach this ability: first by transforming into the Goddess Longsword with Farore's Flame,[6] the Goddess White Sword by Nayru's Flame,[7] the Master Sword with Din's Flame and ultimately, the True Master Sword with Hylia's blessing.[8]

The Goddess Hylia created the Goddess Sword and Fi,[4] an intelligent humanoid spirit who resides in the Sword, and gave it the purpose of assisting Hylia's chosen hero.[9][10] She then enshrined the Sword inside the Statue of the Goddess before raising it into The Sky as part of Skyloft.

Preceding the Wing Ceremony, Fi appears to Link in his dreams, foretelling him of his destiny. After Link and Zelda are attacked by a black tornado, Fi appears again to Link in his sleep, calling for him to realize his destiny.[11] After he awakens, Fi appears in the Knight Academy outside of Link's room to guide him Chamber of the Sword. Inside, Fi explains his fate as the Chosen Hero and encourages him to draw the Goddess Sword from its pedestal so that Fi can formally acknowledge him as her Master.[12][13][14]

The final change to the Goddess Sword takes place in the distant past, before Zelda enters into a deep sleep to keep the seal placed upon Demise intact. Her blessing converts it to the True Master Sword,[5][16] extending the cross-guard outward as well as restoring the gem and the Triforce symbol upon it. With this final transformation, the True Master Sword is capable of defeating Demise. Additionally, the time it takes to charge a Skyward Strike is reduced. In Hero Mode, the Skyward Strike is already at its maximum power and charging speed from the previous playthrough, so upon acquiring the True Master Sword its charge time is upgraded again to become nearly instantaneous.

The Goddess Sword houses a spirit, Fi, who guides Link in many ways, such as giving him helpful advice or actually pointing him in the direction he needs to go. When Fi has something to say, the Sword begins to glow, and Link can speak to Fi at any time by pressing down on the D-Pad. Moreover, the Sword has a treasure-seeking ability called Dowsing. With this ability, it can sense important people, items and objects to help Link locate them, acting as a sort of compass.[17] Link can choose in the Dowsing menu which specific object or person he wishes to track down. While Dowsing, the Goddess Sword periodically beeps as it searches for the target, beeping with greater frequency the closer Link is to the target.

If Link holds the Goddess Sword up to the sky, it will be charged up by "energy from the heavens" and be able to release a Skyward Strike once it's swung.[18] This beam can activate the various objects that the Goddess specifically left for the hero, such as Goddess Cubes, Goddess Walls and Goddess Crests.[19][20]

The Goddess Sword is a Weapon that may be obtained at random within a Treasure Chest that appears after tapping "The Legend of Zelda" series Skyward Sword Link amiibo with the amiibo Rune. It has 28 attack power and a durability of 45. The Goddess Sword houses the fire of the Goddess Hylia.[2] It is said that a "heavenly breeze" kicks up around the wielder.[2]

Being made of metal, the Goddess Sword will attract Lightning if it's equipped during a thunderstorm. It will also sink in water, but it can be picked up and manipulated using the Magnesis Rune. If it's exposed to Fire or a Scorching Climate, the Goddess Sword won't burn like a wooden weapon would.

The Goddess Sword appears as part of Fi's moveset in Hyrule Warriors. The three main tiers of the Sword are based on the upgraded versions of it that appear in Skyward Sword. While the first two tiers are named identically to their Skyward Sword counterparts, the Goddess White Sword was renamed the True Goddess Blade for its third tier. The star tier of the moveset added in the Master Quest pack DLC is the 8-bit Silver Arrow.