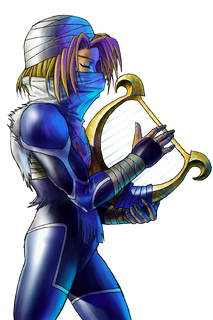 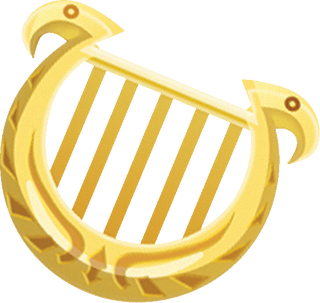 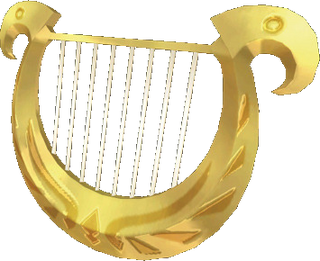 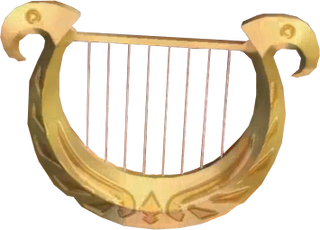 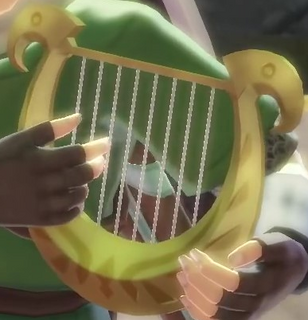 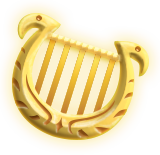 Harp of Ages
Goddess's Harps are recurring Items in The Legend of Zelda series.[1][2][name reference needed][note 1] The Goddess's Harp goes unnamed in Ocarina of Time.

In Ocarina of Time, the Goddess's Harp is never explicitly called by name. It is, however, implied to be the same harp as wielded by Sheik.[4][5] If that were the case, it likely would have been passed down within Hylia's bloodline, the Royal Family of Hyrule. It would have came into the possession of a new incarnation of Princess Zelda who, disguised as Sheik, uses it to teach Link various songs that grant him the ability of Warping. Each time Sheik takes the Harp out, he plays the melody on it first before Link follows along using the Ocarina of Time.

In Skyward Sword, the Goddess's Harp originally belongs to Zelda, the mortal incarnation of the goddess Hylia. She is first seen holding and using it when she is practicing for the Wing Ceremony on Skyloft. After falling to the surface world, Zelda takes the Harp with her to the various temples across the land and uses it reawaken her memories of her life as Hylia.[6] Her childhood friend from Skyloft, Link, eventually receives it from her at the Temple of Time in the Lanayru Desert. After getting through the Lanayru Mining Facility, Link and Zelda have a brief reunion that is interrupted by Ghirahim, forcing Zelda to escape through the Gate of Time with Impa.[7] However, Zelda manages to transfer the Goddess's Harp to the young hero beforehand, telling him that he will need it in his quest.[8][9]

Link goes on to use the Harp to learn various songs that will help him advance in his adventure. He learns his first song, the "Ballad of the Goddess," from the Old Woman in the Sealed Temple. Later, he travels to the Isle of Songs, where he must play three different songs of the Goddesses to open the Silent Realm trials, and lastly learn the "Song of the Hero" from Levias and the three dragons of the Surface.[10] By the end of the game, Link and Zelda are seen standing together outside the Sealed Temple as he plays the "Ballad of the Goddess."

The Harp makes use of the Wii MotionPlus in order to play it, and it is the main instrument of the game.[4] When played, it activates vital objectives and can be used to make Gossip Stones and Goddess Walls appear in certain locations. The Goddess's Harp is equipped to the up-button on the D-Pad and it is played by directing the Wii Remote to the left for the lower notes and to the right for the higher notes. When playing the Harp, pulsating circles of light on the ground indicate the tempo at which Link should strum the Harp.[11] If Link is playing it at the right tempo, Fi will join Link by providing the vocals. Link is given a visual clue indicating when to strum the Harp when a song has to be played, for example three congregating Blessed Butterflies near a Goddess Wall. It also plays a vital role in the Lumpy Pumpkin mini-game.

The tones produced by the Goddess's Harp will follow the harmonics of the background music in the location it is played.

Sheik is seen playing the Goddess's Harp in the opening sequence of Super Smash Bros. Melee.

In Hyrule Warriors, the Goddess's Harp is Sheik's starting weapon. Its attacks involve music which can damage enemies or activate effects that Sheik can use to her advantage. It can also change its elemental type when used in certain attack combos. It can be upgraded to the Typhoon and Triforce Harps.