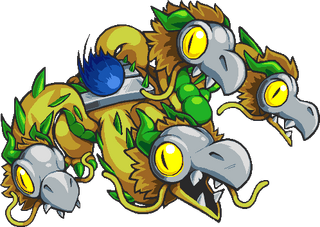 Gleeokenspiel is a boss in Cadence of Hyrule.[1]

The Gleeokenspiel makes it's appearance in the Temple of Storms, acting as the boss. Depending on which order the player chooses to take on the four dungeons in the game, Gleeokenspiel's color scheme and durability changes, but it's general characteristics stay the same. (HP values represent as following: 1st/2nd Boss-3rd/4th Boss)

Gleeokenspiel consists of five parts, it's four heads and it's body, each part having 6-8 hearts each. The boss is on a 16-beat pattern and has two phases: for the first 12 beats in the pattern, during Phase 1 the Gleeokenspiel Heads attached to the body do one of two things every other beat. Either they jump within a certain distance, or launch a fireball towards the current character. On Beat 13, the boss will charge itself with electricity, telegraphing this when the boss's body plays the glockenspiel on it's back with it's tail. After three beats, the heads still attached will each shoot a beam of electricity vertically straight ahead of it, and any adjacent to a water tile will electrify the pool.

When a head is defeated, it detaches from the body with 2-3 hearts. Detached heads will jump diagonally on every beat, turning if it cannot jump any further that way, occasionally launching fireballs as it does so. When all four heads are defeated, the body starts to move on every other beat, always moving towards the player as it does. However, it still electrifies itself every 13th beat, giving the player time to move away. Upon defeat, Gleeokenspiel leaves behind the instrument that created it, the Glockenspiel, and one extra Heart Container.