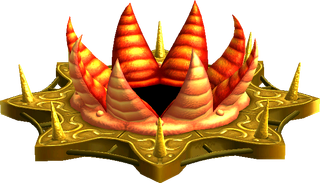 Sword
Gust Jar
Bomb Flowers
Gigaleon is the Boss of Deception Castle, which serves as the Mini-Boss of Sky Realm, in Tri Force Heroes.[1]

Gigaleon is a floating, saucer-shaped creature with a large, tentacle-covered hold on its top side. On its underside is a single, exposed eye that acts as its weak point.

The Links fight Gigaleon upon a floating platform in the sky. Gigaleon will drop dark balls of fire onto the platform while flying through the air, which will burn the Links on contact and remain on the ground for several seconds. At each corner of the platform is a wind turbine that can be activated by using the Gust Jar on them, which will create a large twister from their fans. To attack Gigaleon, the Links must activate the wind turbines when it flies over them. This will stun it, allowing either of the other Links to use the Gripshot to pick up a Bomb Flower from one of the floating ledges on either side of the arena, and throw it into the fan, causing it to explode once it hits Gigaleon's eye, damaging it.

Once damaged enough, Gigaleon will throw flames at the Bomb Flower ledges, causing the Bombs to explode and the ledges to fall. It will also flip itself over, so that its vulnerable eye faces upwards. Gigaleon now moves faster and floats above the wind turbines for less time. It continue its attack by dropping flames more aggressively, occasionally chasing a single Link while doing so. The Links must again stun Gigaleon by using the Gust Jar on the wind turbines, however, since a Bomb Flower can no longer be thrown at it, one Link must be thrown into the turbine's gust instead. This will propel him onto Gigaleon's saucer body, allowing him to strike its eye with his Sword. After enough Sword strikes, Gigaleon will fall onto the platform, allowing all three Links to attack it until it is defeated.

Gigaleon's name comes from giga, meaning giant, and "leon" from Keeleon. This suggests that it is actually a giant Keeleon. Both monsters also have similar tentacles that they use to throw explosives. This is also reflected in its Japanese name, as both creatures have similar names.

Gigaleon's original Japanese name was ダムダム (Dum Dum), but it was changed as that name fitted Prismantus better.[2]