Zelda Wiki
Register
Don't have an account?
Sign In
Advertisement
in: The Wand of Gamelon Pages with Invalid or Missing Terms, Enemies, Living Corpses and Disembodied Enemies,
and 32 more 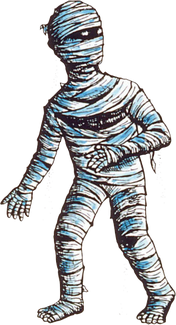 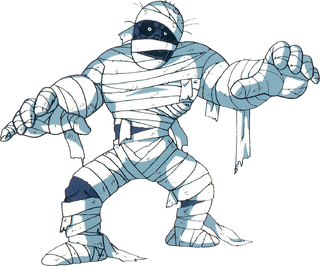 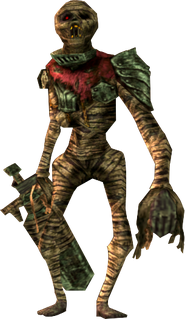 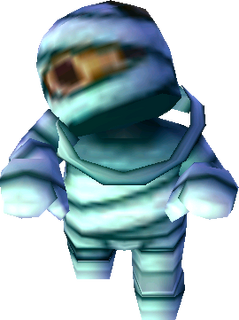 Gibdos are recurring Enemies in The Legend of Zelda series.[2][note 1]

Gibdos are undead, mummified corpses commonly appearing within Graveyards and Dungeons. They are one of the more resilient enemies in The Legend of Zelda series, as they are weak to few weapons and are not knocked back when hit with a Sword in most games.[5] In some games, they are able to use a petrifying gaze to stun Link, identically to that of the similar ReDeads. They are very susceptible to fire-based attacks, and take great damage from items such as the Fire Rod and Din's Fire.[6] Burning away a Gibdo's bandages in Majora's Mask will even reveal it to be a ReDead, while in other games, burning a Gibdo's bandages instead reveals a Stalfos.

Gibdos first appear in The Legend of Zelda. When defeated, Gibdos may drop either a Heart, one Rupee, four Bombs or a Clock.[note 2]

In A Link to the past, Gibdos first appear in Skull Woods, and deal a whopping 3 hearts of damage, they are also found later in Ganon's Tower. They are weak to all fire, namely the fire rod, which is the main item of Skull woods.

Gibdos appear in the Shadow Temple and the Spirit Temple in Ocarina of Time. They are susceptible to the "Sun's Song", which will stun them for a period of time after being played. Unlike Redeads, which walk around in circles, thereby making them briefly harmless when one is killed in the same room, Gibdos are not affected by this therefore making them more dangerous.

Sentient Gibdos can be found Beneath the Well in Majora's Mask, requesting that Link bring them certain items when he wears the Gibdo Mask.[8][9]. They also appear in Ikana Canyon. They have an intense dislike for the song "Farewell to Gibdos", composed by Pamela's Father, and will retreat into the ground when they hear it.

Wearing the Gibdo Mask will keep Gibdos from attacking Link. Interestingly, neither Gibdos nor ReDeads are able to harm Deku Link or Goron Link, as the former and latter are too small and large respectively for them to attack. Both forms are still vulnerable to Gibdos' paralyzing gaze. Using Fire Arrows against them will result in their bandages being burnt off, revealing a ReDead. However, they will not begin to dance if Link is wearing Garo's Mask or the Captain's Hat, unlike other ReDeads.

Gibdos appear in the Royal Crypt, the Palace of Winds, and Dark Hyrule Castle. If their bandages are burned away using the Flame Lantern, they will reveal a Stalfos underneath. Some Gibdos hold items such as Small Keys.

Gibdos appear in Arbiter's Grounds and the Cave of Ordeals in Twilight Princess. They lay motionless on the ground until Link approaches, then they rise and drag their sword towards him. When Link is within their attack range, Gibdos will release a paralyzing scream before attacking with their sword.

12 Arrows, two Bomb Arrows, the Ball and Chain, a Jump Strike, and a Mortal Draw can all be used to defeat Gibdos. As Wolf Link, they can be defeated by targeting and continuously biting them twice. A Back Slice can be used if Link is caught in a Gibdo's scream by pressing the A button and tilting the control stick left or right. When it brings down its sword, Link will roll around it and slice at it, leaving the Gibdo vulnerable.

Gibdos appear in three episodes of the The Legend of Zelda TV series. In "Kiss'n Tell", a Gibdo disguises itself as a beautiful maiden who is pretending to be under attack by a Gleeok in order to draw Link onto the scene. Although Princess Zelda arrives first, Link eventually appears and defeats the Gleeok. The maiden then rewards Link with a kiss, and as their lips meet, Link turns into a frog while the maiden turns to her true form.[10] When Link reaches for his sword, he realizes that his hands have turned frog-like and is too distracted to see that the Gibdo is about to attack him.[11] However, Zelda pushes him out of the way and easily defeats the Gibdo by spinning it until it disappears back to Ganon's Evil Jar.[12] Ganon congratulates the Gleeok and Gibdo for their success and leaves the Underworld to proceed with his plan to obtain the Triforce of Wisdom.[13]

In "Underworld Connections", a Gibdo briefly appears out of the darkness while Link and Zelda are trying to recover the missing shards of the Triforce of Wisdom. The Gibdo attempts to grab the Triforce from Zelda's hands, but the young hero easily zaps it away. Lastly, in "The Moblins are Revolting", the Gibdos join the struggle formed by the Brotherhood of Underworld Monsters, where they try to attack North Castle; however, they accomplish nothing meaningful and eventually return to Ganon.

If Zelda picks up the Magic Arrows in Midoro Palace, she will shoot one of them at a Gibdo, causing it to burst into flames and scare the other Gibdos away.[14] This frees a Blue Fairy, who will thank Zelda by healing her and providing her with the Fairy's Scroll. More Gibdos will then begin to approach her, but she enters a nearby door to escape them.

In The Wand of Gamelon, a Gibdo appears as the first Boss. It is located in the abandoned church of Sakado, using it as its base of operations. It terrorizes the town by commanding the monsters in that area and raising the dead to enslave the living.[15] It also plays the church's organ.

Princess Zelda defeats it with the Shroud given to her by Lubonga in Aru Ainu, of which it is afraid.[16] The Shroud is the only item that will defeat it, as normal attacks are ineffective. It fades away as the Shroud is thrown onto it.

In Hyrule Warriors, Gibdos appear as Captains. They drag large swords behind them, which they will infrequently swing in a slow but brutal attack on nearby enemies. When surrounded with enemies, Gibdos will release a ranged shriek, stunning all nearby foes. If an opposing Warrior stands in line of their view but outside of their regular shriek's radius, the Gibdo will release a controlled shriek in the direction of the Warrior. Their shrieks leave them vulnerable, however, causing their Weak Point Gauge to be exposed. Gibdos also have an additional attack, in which they glow before releasing a poisonous miasma around them, similar to Deku Babas. While charging this attack, they expose their weakness to Arrows. Shooting them while glowing will expose their Weak Point Gauge and cause them to spin around, damaging their allies in the process.

Gibdos appear in Link's Crossbow Training in Level 7-1. They behave similarly as their Twilight Princess incarnations, and as they are shot down, more appear to attack. They rise up from inside coffins, often near the camera. A single shot to the head with a normal Arrow will destroy them, though using Exploding Arrows is the most effective way to destroy larger groups that appear.

Gibdos appear as enemies in Cadence of Hyrule where they move to the beat of the music. Their behavior is modeled after the Golem enemies from Crypt of the NecroDancer. As they make their way towards Cadence, Link, Yves, or Zelda, they will stand still for two beats, crouching on the third before jumping to attack on the fourth beat. They can be turned into ReDead by burning off their bandages by hitting them with fire either from the Fire Rod, Fire Arrows, or fireballs casted by the Fire Wizzrobe. The game itself introduces Black Gibdos and Green Gibdos, which are stronger.

Gibdos in The Legend of Zelda series
Community content is available under GNU Free Documentation License unless otherwise noted.
Advertisement