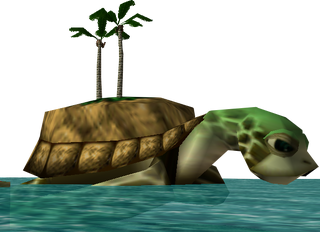 The Giant Turtle is a character in Majora's Mask.[2]

The Giant Turtle is a very old creature that spends most of its time asleep,[3] disguising itself as a small island in the Great Bay.[4] Despite this, it is aware of everything that is going on in the ocean.[5][6] The Giant Turtle is also aware of Link's ability to change his shape and his quest to save Termina.[7][8] As such, it offers to take Link to the Great Bay Temple when it is awoken by the "New Wave Bossa Nova" played by Zora Link. Link can them climb on its back by shooting the Hookshot at its palm trees. When Link defeats the temple's boss, Gyorg, and helps the third Giant, the Giant Turtle informs Link that he will go back into his slumber after listening to Lulu sing.[9]

In Super Smash Bros. Melee, the Turtle appears as part of the Great Bay stage. It functions as an extra platform that at times disappears under water. The palm trees on its back also serve as platforms. It can either appear with his head towards the screen or with his head to the left. It also appears as a Trophy.

In Super Smash Bros. Ultimate, the Turtle appears once again as part of the Great Bay stage, working as an extra platform that at times disappears under water, with the palm trees on its back also working as platforms. The Turtle can either appear with his head towards the screen or with his head to the left.