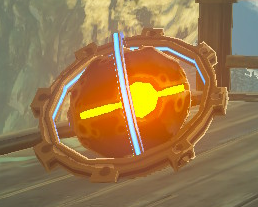 Giant Ancient Cores are a rare drop from Guardians. They can also be obtained from Treasure Chests in Ancient Shrines. Like all Ancient Materials, they were made by the ancient Sheikah 10,000 years before Breath of the Wild. When placed on the ground, the inner ring will spin horizontally and the core will spin diagonally.

The Ancient Oven at the Akkala Ancient Tech Lab requires Giant Ancient Cores to make several pieces of Ancient Soldier Gear, such as the Ancient Bow. Giant Ancient Cores, as Monster Parts, can also be combined with critters in a Cooking Pot to make Elixirs. However, Cooking them with anything else will result in Dubious Food. The Kochi Dye Shop will accept them as an ingredient for Gray Dye, but they can also be sold to Kilton at the Fang and Bone for Mon.

Giant Ancient Cores are required to upgrade the following pieces of Armor at a Great Fairy Fountain.

Giant Ancient Cores are very rare drops on the battlefield, as well as buyable items from Merchants. Additionally, the device wielded by Astor somewhat resembles a Giant Ancient Core, albeit with the coloration of Malice.