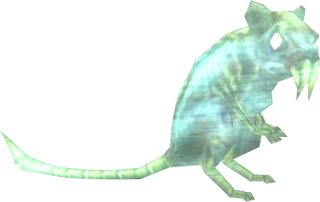 Ghoul Rats dwell in dark environments such as the Arbiter's Grounds, Hyrule Castle, and the Cave of Ordeals. These invisible creatures will not hurt Link directly, but will cling onto him and slow him down significantly, leaving him vulnerable to other enemies. Link will also be unable to jump off ledges at full speed with Ghoul Rats clinging to him, and will sink much more quickly in quicksand.

Ghoul Rats can only be detected by transforming into wolf form and using Link's heightened senses. While in wolf form, Midna will also start struggling as a result of the Ghoul Rats clinging onto them both. One can also tell if these rodents are attached is when Link starts walking slowly and heavily, as though he is wearing the Iron Boots. Indicators of Ghoul Rats nearby include puffs of dust originating from seemingly nowhere and the sounds of disembodied squeaking. By observing these signs, it is possible to attack these enemies before they can cling onto Link. They can only be defeated while using Wolf Link's senses.

A single Spin Attack while in wolf form will destroy any rats clinging to Link.