Zelda Wiki
Register
Don't have an account?
Sign In
Advertisement
in: Graveyards, Locations, Locations in A Link to the Past 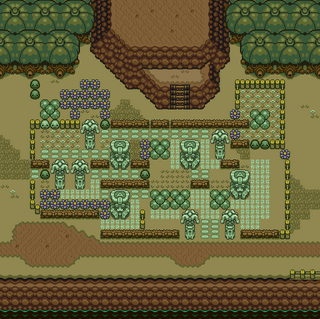 The Ghostly Garden is a small area of the Dark World that appears in A Link to the Past.[name reference needed] It is the Dark World counterpart of the Graveyard.

The Ghostly Garden, despite its name, contains very little in the way of plant life. Its layout is very similar to the Graveyard of the Light World, but instead of graves it is a scattered array of unusual statues (much like ones found elsewhere in the Dark World, such as in the Plains of Ruin) and small collections of angular rocks that can be destroyed using the Pegasus Boots. The rock garden is populated by the plant-like Ropa, and guarded by a single Hinox. The Ghostly Garden itself does not contain any significant items that make it worth exploring, but by using the Magic Mirror, Link can access a cave in the Light World, and by navigating the area correctly he can even access the tomb containing the Magic Cape long prior to obtaining the Titan's Mitt that is normally required for access.

While the Ghostly Garden itself contains far fewer secrets than its Light World counterpart, by Dashing into the rocks that correspond to the graves that lead to the Sewer Passageway and the Magic Cape in the Light World they will reveal a Bomb and a red Rupee respectively, while the northern centermost rock structure will reveal a Fairy.

Graveyards in The Legend of Zelda series
Community content is available under GNU Free Documentation License unless otherwise noted.
Advertisement