Temple of the Sacred Sword

The Hero of Legend

"The temple door is open! He who shall wield the sacred sword has appeared! Please excuse our trespasses..."
— Ghost Soldier

Ghost Forces are the Ghosts of Hyrulean Forces soldiers that guard the Temple of the Sacred Sword in Hyrule Warriors.

The Ghost Forces are apparently the spirits of fallen Hyrulean Soldiers who guard the Temple of the Sacred Sword where the Master Sword in its Sacred Pedestal keep the final fragment of the Demon King of Evil's soul under seal. Despite being death, their spirits dutifully guard the Temple from beyond the grave, defending it from all but the chosen Hero.

After sealing the Gate of Souls in each era, the Allied Hyrulean Forces head to the Temple of the Sacred Sword to retrieve the Master Sword, which Zelda believes to be necessary in order to defeat Cia. However they are attacked by the Ghost Forces outside the Temple, who view the Hyrulean Forces as trespassers despite the Hero Link's and Princess Zelda's presence among them. After activating the three statues to open the doors of the Temple, more Ghost Forces and Summoners show up and the Hyrulean Forces realize they are being controlled. Eventually Proxi, realizes there is a fake among them and discover a fake Lana near the old fountain in front of the Temple. After Fake Lana is defeated, the Ghost Forces return to normal, free of the fake's control. Once the doors to the Temple open, they realize the god's chosen hero has appeared and yield to Link and Hyrulean Forces. They ask the Hero and Hyrulean Forces to forgive their trespasses before disappearing and are never seen again.

From a gameplay stand point, Ghost Soldiers are the same as Hyrulean Soldiers as they use the same character model, animation and attacks. The only difference being them is their coloration and the fact they do not drop Materials when defeated (though they will drop Rupees, Hearts, Force Gems, and Magic Jars). 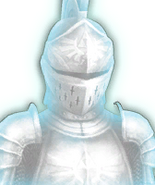 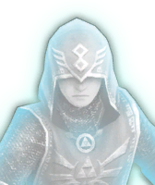 Retrieved from "https://zelda.fandom.com/wiki/Ghost_Forces?oldid=510937"
Community content is available under CC-BY-SA unless otherwise noted.