Not to be confused with Ghini or Poes. For other uses, see Ghost (Disambiguation) 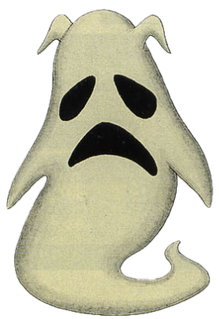 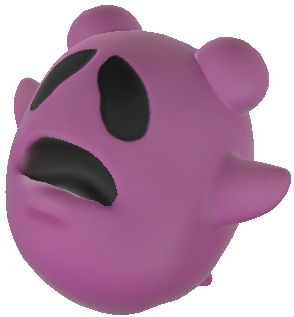 Era of Light and Dark (LA)

Ghosts are recurring characters in The Legend of Zelda series.[2][3][4]

The Ghost is a spirit who starts haunting Link after the completion of the Angler's Tunnel, wanting him to take it to its house.[5] As Link cannot enter Dungeons while the Ghost follows him, he must help it in order to enter Catfish's Maw.[6] Once Link brings it to the Ghost's House north of Toronbo Shores,[7] the Ghost examines it before saying it is essentially unchanged from what it was when it was alive.[8] The Ghost then asks Link to bring it to its grave,[9][10] which is located in the Koholint Prairie near the Graveyard. Once there, the Ghost thanks Link and tells him to look inside one of the Pots in its house to find a Secret Seashell.[11] The Secret Seashell does not appear until after Link has fulfilled the Ghost's requests.

In Link's Awakening DX, if Link approaches the Ghost's grave after returning it there, the Photographer will appear and take a Photograph.

In Link's Awakening (Nintendo Switch), the Secret Seashell inside its house can be found at any time. Instead, the Ghost rewards Link with a Fairy Bottle after returning it to its grave.

The Ghost is an evil spirit that haunts Gregal at the Home of the Wind Tribe.[12][13] Link can save Gregal by sucking the Ghost up with the Gust Jar. If Link does not save Gregal from the Ghost before arriving at the Home of the Wind Tribe via Veil Falls, Gregal will die and both he and the Ghost will disappear. This renders the Light Arrow unobtainable, as it is a reward given to Link by Gregal if he is saved.

An ancient king of Hyrule, Gustaf, appears as a Ghost residing in the Royal Crypt.[14]

Additionally, there are two Ghosts named Spekter and Spookter; Spekter resides in the Royal Valley, while his brother Spookter can be found by Anju's Henhouse in Hyrule Town.

In the Link's Awakening manga by Ataru Cagiva, the Ghost is named Nakura, who is a former soldier. It saves Link's life by possessing him during his fight against Karuna and gives him a more powerful Sword after he takes it to its house.