Ghirahim's Cape is based on the cape Ghirahim wore in The Legend of Zelda: Skyward Sword. Interestingly, Ghirahim had a habit of removing it before battles, indicating that he either does not want it to get damaged and/or to prevent it from being a hindrance (as removing it allows him greater freedom of movement and removes a potential liability).

Offical Artwork of Ghirahim wearing his Cape from Skyward Sword

Promotional Render of Ghirahim wearing his Cape from Hyrule Warriors 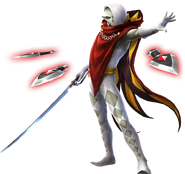 Retrieved from "https://zelda.fandom.com/wiki/Ghirahim%27s_Cape?oldid=540759"
Community content is available under CC-BY-SA unless otherwise noted.