Zelda Wiki
Register
Don't have an account?
Sign In
Advertisement
in: Enemies, Common Enemies and Traps, Ghost Enemies,
and 16 more 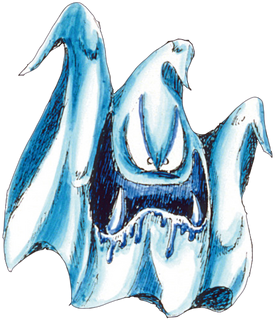 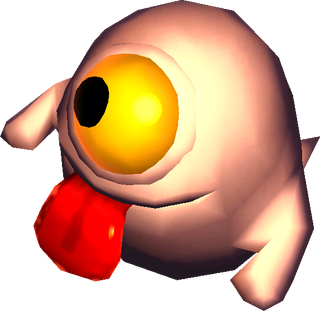 Ghini are one-eyed spirits that are normally found in Graveyards, often depicted with their tongues lolling out of their mouths. In nearly all of their appearances, Ghini fly in sporadic or circular patterns. Ghini are known to attack in groups, with a seemingly collective life force. In these instances, when the first Ghini is slain, the entire group will be destroyed in the same instant. Later games do not include this behavior, and most Ghini simply attack alone or in smaller groups. While they can be dispatched with a variety of weapons, Ghini often require many Sword swings to defeat.[2]

The Giant Ghini is a notable variation of this enemy, a much larger Ghini that occasionally acts as a Sub-Boss.

Ghini inhabit the western Graveyards on the Overworld of Hyrule in The Legend of Zelda. One Ghini appears haunting each set of tombstones; however, more Ghini will spawn if Link disturbs any of the graves by touching them. More Ghini can appear from the same tombstone if Link continuously touches it. Ghini that appear from tombstones cannot be harmed by any means, attacks going through them with no effect. Instead, Ghini all share what appears to be a collective life force, as all Ghini on the screen will be destroyed if Link slays the first that appears in that area. They do, however, take several hits with the Sword to defeat. Even after the first is slain, more Ghini can still appear from tombstones and remain invincible. When both types of Ghini are on the screen at once, they can be differentiated from each other by their movements; the first type floats slowly and around the graves, whereas the others fly more sporadically. When defeated, Ghini may drop either a Heart, one Rupee, five Rupees or a Clock.[note 1]

Ghini appear in the Cemetery east of the Koholint Prairie and north of Ukuku Prairie in Link's Awakening. Like those in The Legend of Zelda, one Ghini appears haunting each set of tombstones. Only certain graves can summon Ghini by touching them, and only one can be summoned to that specific grave. As in The Legend of Zelda, slaying the first Ghini will destroy all other Ghini on the screen. Though the other Ghini are no longer invincible and can be attacked, defeating them will not destroy the others.

A Giant Ghini also appears by disturbing one of the Cemetery's tombstones. This larger Ghini takes many more hits to defeat, but like the other Ghini that spawn from graves, it can be instantly destroyed by defeating the first Ghini in the area.

Ghini appear similarly to those of The Legend of Zelda and Link's Awakening in Oracle of Seasons. They inhabit the Graveyard in western Holodrum close to the Western Coast, and like Ghini of previous games, a lone Ghini can be found haunting a set of graves, with more appearing when their tombstones are disturbed. Any grave can spawn a Ghini, but only one per grave. All Ghini that appear can be fought, and destroying the first one of that area will also destroy any on the screen. Despite the Ghini' characteristic resilience, they can be defeated with a single hit of the Rod of Seasons.

Ghini vary slightly from their Oracle of Seasons appearance in Oracle of Ages, as they no longer inhabit Graveyards on the Overworld, but rather appear inside Dungeons. A lone Ghini appears in a single room in the Spirit's Grave, and must be defeated to open a door. Groups of Ghini appear in several rooms in the Ancient Tomb. These Ghini do not appear to share their life force, as defeating any one will not affect the others.

A Giant Ghini also appears as the Sub-Boss of the Spirit's Grave. This Ghini bears a distinctive appearance, without a single eye or a lolling tongue, and is surrounded by smaller Ghini with a similar look.

Ghini appear as bright blue ghosts in Vaati's Palace in Four Swords. They also appear in The Legend of Zelda-themed stage of the Realm of Memories and the Hero's Trial in Four Swords Anniversary Edition. Ghini behave differently from previous appearances, appearing in smaller groups and grabbing onto the Links to drain their health. These Ghini are not connected to one another, and defeating one will not defeat any others.

Ghini appear in small groups in Four Swords Adventures, typically congregating in dark areas. They move in swaying motions and emit blue light as they fly, slightly illuminating the area around them. Ghini in Four Swords Adventures do not emerge from tombstones, nor do they share a collective life force between each other. They are also much less resilient than previous appearances, and now only take one Sword strike to defeat. Ghini will periodically turn invisible, leaving only their shadow behind. They can be found in the cemetery of The Swamp, in the dark castle basement in the Infiltration of Hyrule Castle, and during the blizzard portion of Frozen Hyrule. Ghini in The Swamp are susceptible to Light and can be defeated by lighting certain Torches, while Ghini in other stages are unaffected by torchlight. Some Ghini also hide inside Jars in the basement of Hyrule Castle. Ghini are also summoned by the Big Poe during both of its Boss battles.

Giant Ghini also appear in The Swamp. These large ghosts can only be defeated by lighting nearby Torches activated by Switches.

Ghini in The Minish Cap possess an entirely different set of behaviors from those of previous games. They can be found in the region surrounding the Royal Valley and within Dark Hyrule Castle, but no longer emerge from graves and appear individually. Ghini are first seen sleeping, but awaken and pursue Link once he approaches. They exhibit behaviors similar to Ghini from Four Swords, as well as ReDeads of other games; they will constrict Link's body using their tail once they catch him, and lick the life away for as long as they can secure him in their grasp. Link must struggle free to prevent his life from being further drained.

There is also a friendly pink Ghini named Gina, who appears in a grave in the Royal Valley. This Ghini offers to Fuse a number of Kinstone Pieces with Link.

Light Ghini appear in "Light" and "Dark" versions in A Link Between Worlds; Light Ghini resemble the ordinary white-colored Light Ghini, whereas Dark Ghini are black-colored and have a red eye.[4] Both types appear in the pitch-dark corridors of the Dark Palace. Light Ghini hide themselves in the darkness of the Dungeon, but are easily seen when the area is lit, either by lighting Torches or using the Fire Rod or Lamp. Conversely, Dark Ghini are entirely visible in darkness but turn invisible when exposed to light. Both Light Ghini move in small circular patterns and usually appear alone or in very small groups. They can be attacked regardless if they are visible or not. Both Light Ghini also appear in the Treacherous Tower.

Both "Light" and "Dark" Light Ghini types from A Link Between Worlds appear in Tri Force Heroes, albeit with slightly different behaviors. Dark Ghini appear in the Palace Noir, inhabiting the dark chamber of the second stage, while Light Ghini appear in the Lone Labyrinth and the Sky Temple. While similar to those from A Link Between Worlds, neither type is affected by light. Dark Ghini are able to better conceal themselves in darkness, and remain visible even when exposed to light. Light Ghini continue to hide in darkness, but only on The Ruins-themed platform in the Sky Temple.

In The Faces of Evil and The Wand of Gamelon, Ghini resemble ghostly old men that fly through the air. Like other airborne enemies, they repeatedly spawn from certain areas and fly directly at either Link or Princess Zelda. They are unable to change direction mid-flight. They appear in white and green-colored varieties, although very little differs between them. Ghini typically inhabit haunted or crypt-like locations, such as the Goronu, Glutko and Lupay regions of Koridai, and Sakado's crypt and the Gobiyan Ship of Gamelon.