"A mask worn by Gerudo women. It protects the skin from the harsh sun, but don't expect it to protect much in combat..."
— In-game description

The Gerudo Veil is an item from The Legend of Zelda: Breath of the Wild. It is a Gerudo head armor and "vai" clothing normally worn by the Gerudo. Link can buy it as part of a set from Vilia at Kara Kara Bazaar in the Gerudo Desert region during the "Forbidden City Entry" Quest, though Link can also purchase addition Veils from Vilia after this, allowing Link to reacquire it if he sells it. Link can also purchase a white dyed Gerudo Veil from Fashion Passion in Gerudo Town but he can only do that after obtaining the set from Vilia.

It is the vai counterpart to the Desert Voe Headband in the sense that it grants heat-resistant though only when worn with the Gerudo Top and Sirwal as it grants "Heat-Resistant" set bonus and not the "Heat Resistance" effect, as it cannot be upgraded. Thus it only increases Link's defense by a negligible amount, even when worn as a set. Furthermore, the Heat-Resistant set bonus does not help when the Gerudo Desert gets to its hottest point, as it only grants low level heat resistance. As a result it is a good idea to wear a Sapphire Circlet or the Desert Voe armor set, both of which can be upgraded and provides stronger Heat Resistance (to a maximum of Level three when the entire set is worn).

However Link needs the veil, Gerudo Top, and the Gerudo Sirwal (Link can also wear the Sand Boots or Snow Boots in place of the Sirwal, as the disguise will be maintained) to enter Gerudo Town because there is no possible way that Link can sneak in there without this disguise worn as a set. The disguise is required to complete the "Forbidden City Entry" quest. The only place in Gerudo Town where the disguise can be removed is the interior of the Gerudo Secret Club as Greta sees through the disguise though permits Link to stay as her shop is a black market that sells "voe" (men) clothing as it is legal for Gerudo residents and merchants to sell voe clothing (non-Gerudo vai travelers however are apparently exempt as Link can sell men's armor and clothing to Gerudo merchants in Gerudo Town without trouble).

Gerudo Chieftain Riju and her bodyguard Buliara eventually realize Link is a voe when they remember that the Hylian Champion was voe, though out of respect for his status and association with the Gerudo Champion Urbosa who is still respected by the Gerudo one hundred years after the Great Calamity they permit him to remain in Gerudo Town and keep his status as a voe a secret, allowing him to maintain his disguise, though in exchange Riju ask for his assistance in calming Vah Naboris and reclaiming the Thunder Helm from the Yiga Clan Hideout.

Even after freeing Vah Naboris, Riju only permits Link to enter Gerudo Town while disguised as a Vai, in order to maintain the law forbidding voe, while knowingly allowing a voe such as Link to enter Gerudo Town disguised as a vai, though this is due to Link's status as the Hylian Champion and him being a comrade of the Gerudo Champion Urbosa. As a result the Vai Disguise is similar to the Gerudo Membership Card from Ocarina of Time. 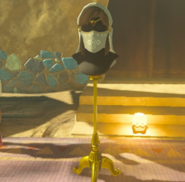 Retrieved from "https://zelda.fandom.com/wiki/Gerudo_Veil?oldid=540380"
Community content is available under CC-BY-SA unless otherwise noted.