Zelda Wiki
Register
Don't have an account?
Sign In
Advertisement
in: Valleys, Locations, Locations in Ocarina of Time,
and 3 more 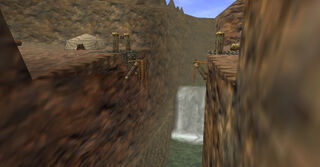 Gerudo Valley as seen in Ocarina of Time

Gerudo's Fortress
Desert Colossus
Gerudo Valley is a recurring location in The Legend of Zelda series.[1]

Gerudo Valley is a blisteringly hot valley located in the northwest corner of Hyrule in Ocarina of Time. It leads to the Gerudo's Fortress, home of the proud female warrior race of Gerudo.[2] Beyond lies the Haunted Wasteland, a harsh and unforgiving desert.[3] Zora's River passes through the bottom of the Valley, whose water-flow ultimately leads to Lake Hylia. During Link's childhood, the path to Gerudo's Fortress is blocked by Gerudo guards, making it impossible to get to the other side of the valley. Once the young hero retrieves the Master Sword from its pedestal, the bridge spanning across the chasm will have been destroyed by the Gerudo, forcing Link to use either the Longshot or Epona to get across.[4] There will also be a tent set up near the entrance to the Gerudo's Fortress that is home to the Carpenters who helped build up Kakariko Village; however, all of the carpenters except their boss have left in hopes of joining the Gerudo and becoming thieves themselves.[5] When Link travels to the fortress, he finds out that all four of the carpenters have been imprisoned by the Gerudo, and once he frees all of them, the carpenters return to their previous job to repair the bridge.[6]

Inside the carpenters' tent is the Running Man who, after the bridge is repaired, will challenge the Hero of Time to a race to the bridge that leads to the Kokiri Forest.[7][8]

Over the river, there is a small ledge where a box is placed. Link can fly to this spot with the help of a Cucco, and find a Piece of Heart inside the box. The river below the valley is infested with Octoroks as well as giant, rolling boulders. Link can dive into the portion of the river closest to the waterfall, where there is a small platform with a patch of soil where Magic Bean can be planted. Behind the waterfall is a ladder that leads to a ledge with a second Piece of Heart. If Link allows the current to take control, he will be swept to the northern part of Lake Hylia, near the Lake Scientist’s lab.

Gerudo Valley appears as a stage in Super Smash Bros. for Nintendo 3DS. The stage features a flat surface divided by a chasm. The stage also features a bridge that can be destroyed by attacks, reconstructing itself after a short time. At the sides of the bridge, two canopies were added as extra platforms, each at different heights. Two posts were also added to the chasm in order to help fighters return to the top, while some spikes are also found below. Koume and Kotake appear as a stage hazard, attacking fighters with fire and ice attacks, respectively.

Valleys in The Legend of Zelda series
Community content is available under GNU Free Documentation License unless otherwise noted.
Advertisement