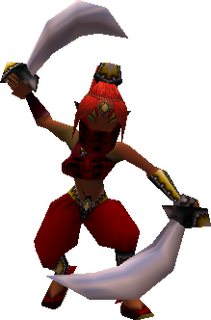 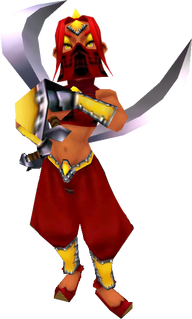 Gerudo Thieves are Sub-Bosses in Ocarina of Time.[1]

In Ocarina of Time, Link encounters Gerudo Thieves in the prison chambers of the Gerudo's Fortress. They guard the cells holding the four captive Carpenters, with one guarding each cell. They shortly reveal themselves as Link speaks with each Carpenter.[2]

Gerudo Thieves are agile swordswomen. They are in constant motion as they combat Link, actively evading his attacks by backflipping and moving in to strike. They can also defend themselves by blocking Link's attacks with their scimitars. They are lastly also capable of performing a powerful, spinning Jump Slash by crouching down. Their regular attacks can all be blocked with a Shield, but their Jump Slashes cannot be shielded from at close range. Unlike most enemies, Gerudo Thieves will not actively attempt to kill Link, but rather weaken him. If Link is hit by their Jump Slash, he will collapse and be taken to a cell. The Gerudo Thief will then have to be found and fought again, with all of her health restored.

Gerudo Thieves are among some of the most resilient enemies in Ocarina of Time; nine slashes with the Master Sword will defeat them. The Biggoron's Sword is more effective, felling them in only five strikes. They can be stunned using Deku Nuts or the Hookshot. If Link backs away from a Gerudo Thief, they will drop their guard, allowing Link to shoot them with the Fairy Bow. After being shot, the Gerudo Thief will dart from side to side, but their guard will remain down, allowing Link to continue shooting until they are defeated.

Once defeated, the Gerudo Thief will retreat, never to appear again. They leave behind a Small Key to their Carpenter's cell. After all four are defeated and every Carpenter rescued, a Gerudo Warrior will appear and commend Link on his abilities, inviting him into the Gerudo's territory.