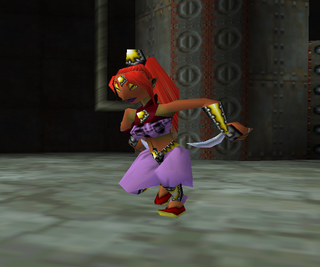 Gerudo Pirates are Sub-Bosses in Majora's Mask.[1] They are skilled Gerudo swordswomen who wield dual scimitars.

In Majora's Mask, Pirates are encountered as enemies inside the Pirates' Fortress, guarding Lulu's stolen Zora Eggs. They are found in rooms whose doors are marked by a golden scimitar panel. They drop down when Link enters, locking him inside and engaging him in combat.[2] There are three of them each, one wearing green, one orange, and one pink.

Gerudo Pirates have an identical attack strategy to the Gerudo Thieves from Ocarina of Time; they are agile fighters who actively evade Link's attacks and strike back in-between. They are also able to perform spinning Jump Attacks as well that cannot be blocked. Like the Gerudo Thieves of Ocarina of Time, they will not attempt to kill Link but merely weaken him. If Link is struck repeatedly or hit by their Jump Attack, he will be captured and thrown out of the Fortress. They can be fought using the Sword, Goron Link's punches, and Zora Link's fin slashes. As Deku Link, they can only be damaged by his Bubble Blast.

After they are defeated, they angrily concede defeat before escaping by throwing a flash bomb.[3] Once defeated, the door to the chamber's aquarium opens, where one of the Zora Eggs are being held.