Zelda Wiki
Register
Don't have an account?
Sign In
Advertisement
in: Enemies, Gerudo, Enemies in Ocarina of Time,
and 3 more 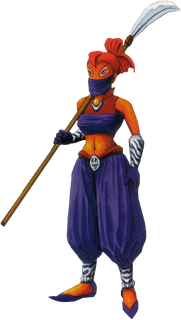 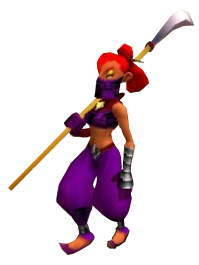 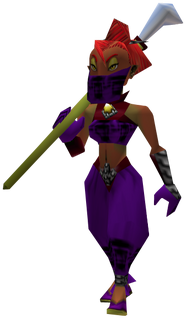 Bow
Hookshot
Gerudo Guards are recurring Enemies in The Legend of Zelda series.[1] They are Gerudo women who patrol their territory for any trespassers, and apprehend them when they are spotted.

In Ocarina of Time, Gerudo Guards patrol the exterior and interior of the Gerudo's Fortress. These Guards walk in a predetermined path within a small area, usually walking back and forth before pausing and turning. When they spot Link in their line of vision, a whistle is blown as the Guard approaches to apprehend him. Afterwards, Link is then thrown into a cell that he can only escape from by using the Hookshot on a wooden board above the cell's opening in the ceiling.

While Link can otherwise sneak by them when they are turned, he is also able to briefly stun or incapacitate them as well, despite being otherwise harmless. Gerudo Guards can be stunned by using the Hookshot on them. This briefly turns them blue as they are immobilized, allowing Link to hit them with a sword to knock them out. Link can also shoot Arrows at them with the Fairy Bow, causing them to collapse unconscious. The guards will stay unconscious until Link enters a new area.

After Link rescues all four Carpenters in the complex and is given the Gerudo Token by the appointed leader, he will no longer have to sneak by the Gerudo Guards, who will recognize him as a member. Link can even talk to them then.[2] He will not be able to attack them after receiving the Gerudo Token.

In Majora's Mask, Gerudo Guards, also referred to as Pirates,[3] patrol the interior and outer perimeter of the Pirates' Fortress. Many of them patrol the inner walls of the stronghold, but there are also Gerudo Guards outside who patrol the area atop moving boats over water. Like those of Ocarina of Time, Gerudo Guards will apprehend Link the moment they spot him. They will, however, only toss him outside of the Fortress. If Link is wearing the Stone Mask, he becomes completely invisible to their vision, and can easily sneak by them undetected.

Gerudo Guards can also be attacked in Majora's Mask. The Hookshot can be used to stun them, and the Bow can be used to incapacitate them. While wearing the Stone Mask, it is also possible to attack them up close with the Sword, causing them to collapse. Unlike Ocarina of Time, the guards will eventually get up after enough time passes.

If Link brings the Fisherman a Pictograph of a Gerudo Guard, he will give Link his captive Seahorse.